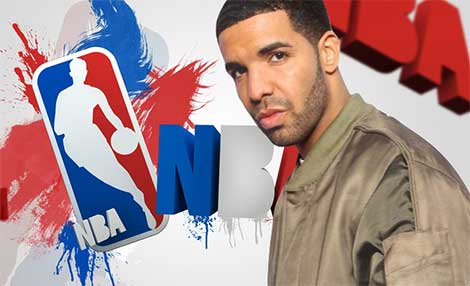 The NBA wants NO association with Toronto Raptors mascot, Aubry the Athlete Groupie aka Drake. Sources say … it all boils down to comments Drake made, earlier this year, aimed at luring Kevin Durant to the NBA’s Toronto team.

“You know, my brother Kevin Durant was kind enough to come to the show tonight and watch us. I just want him to see what would happen if he came to play in Toronto. Let him know what would happen.” -Drake

Reports reveal… “the NBA is willing to drop a $25,000 fine if the Raptors remove Drizzy as its team ambassador. According to a CBC sports reporter, “The Raptors apparently refused.”

“I communicate almost weekly — I would say daily, but I’m sure we miss some days — but definitely every week … with Tim and Masai. I’m just trying to make this a better, stronger team all around. I have my hands in a lot of different areas right now.” -Drake

“Obviously, Drake’s presence is worth more than $25,000, but why would the NBA draw the line here, especially since everyone is going to “tamper” with Durant over the next couple of years?”

Article 35A, section e, of the NBA Constitution outlines the rules of anti-tampering that apply to all people affiliated with an NBA team. It is against the rules “to directly or indirectly:”

ii. [O]therwise interfere with the employment relationship between that employee and the other NBA team.”