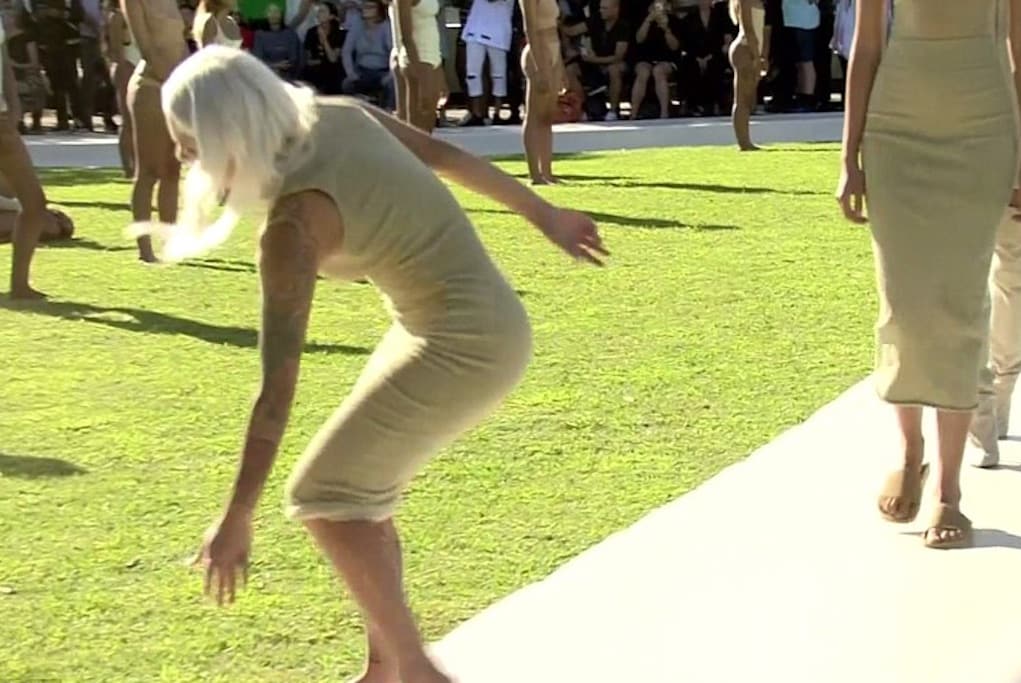 Kanye put on yet another spectacle during his Yeezy Season 4 runway show. The rapper thought it would be a good idea to present his fall/winter collection in the scorching hot heat on Roosevelt Island.

His butt kissing industry friends were in attendance to watch this mess go down. But it was a hellish journey for them to get to the location.

Everyone was forced to board chartered buses in Midtown Manhattan to take them to the runway location at a former small pox hospital. They arrived almost two hours before the show was scheduled but were forced to hang out on the buses.

The lengthy catwalk presentation caused many of the models – who were wearing spandex, wool coats and heavy jackets – to pass out from the heat. Others were forced to wear shoes that were too small, causing them to stumble all over the damn runway.

Other models helped out their fellow model friends by passing out water during the show, and an attendee of the show came to the rescue when one model gave up on life and couldn’t take another step.

A magazine editor who was in attendance took to her Twitter to talk about the horrible show. She says the best thing the industry can do is to stop talking about Yeezy completely.

The most responsible thing we could all do would be to write NOTHING about this show. #YeezySeason4

Being screamed at by security. CHIC. #YeezySeason4

This is shameful and horrible and I regret coming. #YeezySeason4

Model passed out in the heat is given water by man in the audience but no one on the #YeezySeason4 team helps.

Watching editors leave #YeezySeason4 But I feel obligated to watch out for these models and see what else they have to go through.

Back to Skool on the Kanye Bus pic.twitter.com/TwEcw4xs4T

#PressPlay: Seems like #AminaBlue wasn't having it anymore!! #YeezySeason4 #KanyeWest

#PressPlay: Dang they ain't have to do her like that ??? #KanyeWest #YeezySeason4

When your friend is drunk, made a scene and you just want to get them back to the car now: #YeezySeason4pic.twitter.com/XEkCGu1X3F

At the end, Kanye sashayed down the runway…completely oblivious to the fact that he damn near killed some of his models.