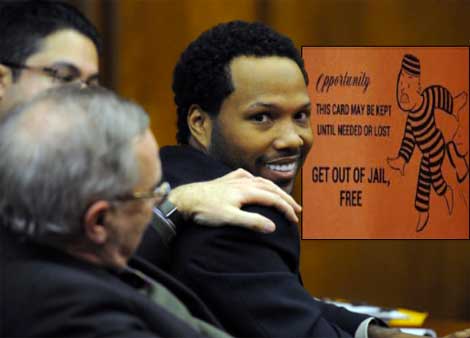 Mendeecees Harris may have been facing 20-years in lock-up but reports reveal he’s a freeman! Know how? Sources say he’s been working with the Feds. Dude’s said snitchin’ is alleged to have led to a sweep of his alleged Rhode Island drug-connections.

“Mendeecees is currently not in federal custody.. no recent court filings. There is a likelihood the case has already been resolved and the details of that resolution are sealed.”

HSK broke the story first.. Back in July 2013, a source provided us with exclusive word, “Mendeecees and Tyrus are cooperating with the cops.” Media outlets are now reporting, “the most recent activity in Mendeecees’ case was an order requiring the parties to inform the Court by November 15, 2013 as to whether the defendant would be requesting a detention hearing. Curiously, no public filings appear on record thereafter.”

According to court docs.. “Mr. Harris was charged with knowingly, willfully and unlawfully combining and conspiring to possess with the intent to distribute 5 kilograms or more of cocaine (Schedule I Substance) and 1 kilogram of heroin (Schedule II Substance). Such narcotics charges are punishable by a sentence of 10 years to life in prison, plus fines. While the laundering charges carry a maximum sentence of 20 years, plus fines.”

Here’s the latest from Uptown Magazine:

“In conjunction with the documents filed in the U.S. District Court for the Western District of New York, the Court seized specific assets from Mr. Harris and his co-conspirators, including such valuables as a Hublot “King Power” in 18kt rose gold ($45,000) and Rolex Oyster Perpetual Day-Date Chronometer in 18kt yellow gold ($40,000). All in all, federal authorities seized over $406,950 in jewelry. Authorities also seized countless sums from various safe deposit boxes (e.g. $488,900 in a Sovereign Bank safe deposit box, $300,200 in a Bank of America safe deposit box and $122,000 in a Chase safe deposit box).”