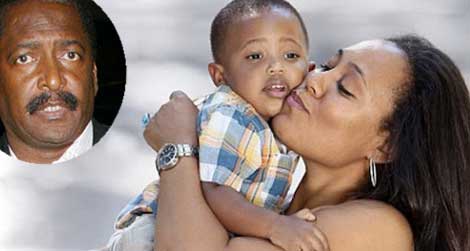 Mathew Knowles’ isn’t just a man responsible for shattering what was once his entire family unit, he’s also a shameless son of a gun revealed to have turned to his own daughter for her and Hova’s help to cover his azz. Don’t believe me.. Just ask Alexsandra Wright.

“Mathew wanted her to hand their baby over to be raised by Beyonce and Jay Z before their own child, Blue Ivy, was conceived.”

You’ll recall… back in 2010, Wright gave birth to a son. The boy, baby Nixon, was later confirmed fathered by Mathew Knowles. Sources reveal Mathew’s desperate damage control attempt involved filing a request with The Carters, asking them to pose as his lovechild’s parents. The rest is history — dude lost it all. In a recent interview the mother of Mathew’s now four-year-old son is speaking out for the first time, telling of his fallen behind on child support payments and barely seeing his son.”

“It’s not anybody else’s responsibility but Mathew Knowles….”

Here’s what Alexsandra Wright revealed to Inside Edition:

“I am the only parent taking accountable at this point. I don’t expect Beyonce to take accountability. It’s not her problem, Its not her situation.

I’m not angry. I’m disappointed. More than anything he raised two other children and was very active and involved in their lives and they turned out very well, so why he’s choosing not to acknowledge his only son, I don’t know, but it’s disappointing…”