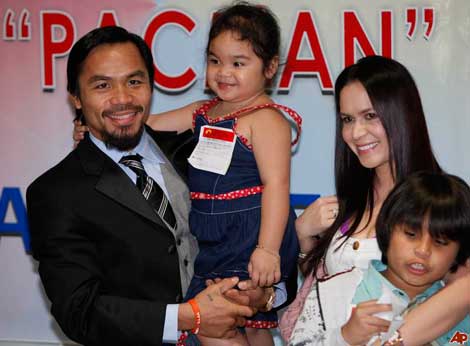 HSK Exclusive – Manny Pacquiao’s days of delving into drugs and smashing strings of groupies may be long gone, but the born again Christian boxer is said to be left with a tight bond to one of his former extramarital smash buddies.

HSK has exclusively learned the Filipino fighter is father to a secret love child, conceived about eight-years ago, with one of his female fans. An insider reveals the kid is a boy. Don’t believe me.. Ask Manny’s wife, Jinkee — who’s said to be familiar with the situation.

Here’s the drop from our insider:

“Manny told me himself, while his wife was right there. His wife was very rude to all females in the room. You’d think being the wife of a man who’s a celebrity, she would conduct herself better. She’s a b*tch.

He told me about the boy while were playing a game of chess — he wasn’t good. He was all about the attack, not thinking of his next move on the board.