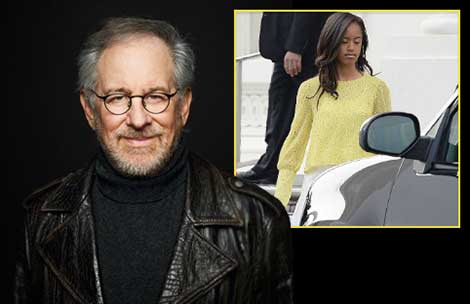 Reports reveal… Malia Obama hasn’t waste any time in heading to Hollywood to use her Presidential Tinseltown-ties to secure herself a spot on a leading set. Just as Steven Spielberg, who’s noted as a “prominent Obama donor”.

Malia, who will mark her 16th birthday on July 4th, is reported to have “spent a day last week working as a production assistant”… on the set of Spielberg’s upcoming sci-fi series “Extant”.

“Malia laughed with delight saying, ‘This is a big deal.”

“First Lady Michelle Obama accompanied Malia to the CBS Studios as the teen helped with re-shoots of the pilot episode, assisting with computer alignments, and the director even let her use a production slate before a take.”