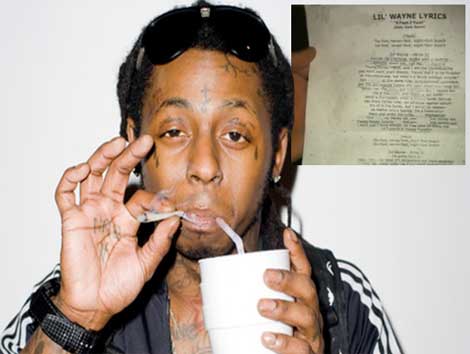 Who is REALLY To Blame?

The lyrics from Lil Wayne’s “6 Foot 7 Foot” track [featuring Cory Gunz] recently made it to an 8th grade Florida classroom, sparking the mother of one of the students to head to the press to expose the teacher behind the homework assignment.

Sources report the purpose of the English assignment was for students to “underline examples of figurative language” in the set of rap lyrics. The teacher — with a reported ‘unblemished record’ is now on a three-day suspension.

“The school’s policy is to use only G-rated material and it must be pre-approved.”

Here’s what the mother Vanessa Guzman had to say:

“Who in their right mind would give kids something like this? I’m uncomfortable reading any of this. This is crazy, they shouldn’t be giving this to kids in school.”

“The lesson was for students to learn to identify literary devices. The teacher had already introduced Edgar Allen Poe and Shakespeare. Students were having difficulty grasping the concepts of literary devices such as: pun, simile, metaphor, so the teacher used colloquial material. This material did not meet the school’s standards and was not approved. The teacher recognizes that it was totally inappropriate for a school assignment.” 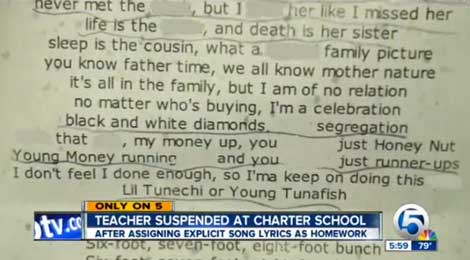 Without condoning the teacher’s choice in materiel, Let’s be real here — how old is a kid in the 8th grade? About 14, 15? Would it not be safe to say a young teen has BEEN heard the likes Weezy’s songs already? Sure, the lyrical content is far from the type of material one would expect a grade school teacher to feature a classroom, but I’m gonna reach a little bit here … isn’t it best to address REAL social issues head-on rather than pretend they don’t exist? What do you think?

[Lil Wayne – Verse 1]
Excuse my charisma, vodka with a spritzer
swagger down pat, call my shit Patricia
Young Money militia, and I am the commissioner
you don’t want start Weezy, ’cause the F is for Finisher
so misunderstood, but what’s a World without enigma?
two bitches at the same time, synchronized swimmers
got the girl twisted ’cause she open when you twist her
never met the bitch, but I f*ck her like I missed her
life is the bitch, and death is her sister
sleep is the cousin, what a f*ckin’ family picture
you know father time, we all know mother nature
it’s all in the family, but I am of no relation
no matter who’s buying, I’m a celebration
black and white diamonds, f*ck segregation
f*ck that shit, my money up, you niggas just Honey Nut
Young Money running shit and you niggas just runner-ups
I don’t feel I done enough, so I’ma keep on doing this shit
Lil Tunechi or Young Tunafish

[Lil Wayne – Verse 2]
I’m going back in
okay, I lost my mind, it’s somewhere out there stranded
I think you stand under me if you don’t understand me
had my heart broken by this woman named Tammy
but hoes gon’ be hoes, so I couldn’t blame Tammy
just talked to moms, told her she the sweetest
I beat the beat up, call it self defense
swear man, I be seeing through these niggas like sequins
niggas think they He-Men, pow, pow, the end
talking to myself because I am my own consultant
married to the money, f*ck the world, that’s adultery
you full of shit, you close your mouth and let yo ass talk
young Money eating, all you haters do is add salt
stop playing, bitch, I got this game on deadbolt
mind so sharp, I f*ck around and cut my head off
real nigga all day and tomorrow
but these muthaf*ckas talking crazy like they jaw broke
glass half empty, half full, I’ll spill ya
try me and run into a wall, outfielder
You know I’ma ball ’til they turn off the field lights
the fruits of my labor, I enjoy ’em while they still ripe
bitch, stop playing, I do it like a king do
if these niggas animals, then I’ma have a mink soon
tell ’em bitches I say put my name on the wall
I speak the truth, but I guess that’s a foreign language to y’all
and I call it like I see it, and my glasses on
but most of y’all don’t get the picture ‘less the flash is on
satisfied with nothing, you don’t know the half of it
Young Money, Cash Money
paper chasing, tell that paper, “Look, I’m right behind ya”
bitch, real G’s move in silence like lasagna
people say I’m borderline crazy, sorta kinda
woman of my dreams, I don’t sleep so I can’t find her
you niggas are gelatin, peanuts to an elephant
I got through that sentence like a subject and a predicate
yeah, with a swag you would kill for
money too strong, pockets on bodybuilder
jumped in a wishing well, now wish me well
tell ’em kiss my ass, call it kiss and tell

[Cory Gunz]
Word to my mama, I’m out of my lima bean
don’t wanna see what that drama mean, get some Dramamine
llama scream, hotter than summer sun on a Ghana queen
now all I want is hits, bitch, Wayne signed a fiend
I played the side for you niggas that’s tryna front, and see
son of Gunz, Son of Sam, you niggas the son of me
pause for this dumber speech, I glow like Buddha
disturb me, and you’ll be all over the flow like Luda
bitch, I flow like scuba, bitch, I’m bald like Cuba
and I keep a killer ho, she gon’ blow right through ya
I be macking, ’bout my stacking, now I pack like a mover
shout to ratchet for backing out on behalf of my shooter
niggas think they high as I, I come laugh at your ruler
Cash Money cold, bitch, but our actions is cooler
Wayne, these niggas out they mind
I done told these f*ck niggas, so many times
that I keep these bucks steady on my mind
tuck these, I f*ck these on your mind, pause
to feed them, on my grind, did I get a little love?
keep throwing my sign in the middle
hit ’em up, piece on my side, ’cause ain’t no peace on my side, bitch
I’m a man, I visit urinals abroad
Tune told me to, I’m shooting when the funeral outside
I’m uptown, thoroughbred, a BX nigga, ya heard?
Gunna