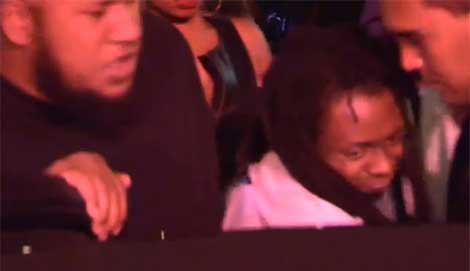 Lil Wayne has parked himself inside of a West Hollywood hotel suite… reported to be dodging the G’s posted up outside of the Le Parc Suites Hotel. A tipster exclusively tells HSK Tunechi’s “union tax” is due. That’s said to be the reason why Weezy was followed to the spot. Don’t believe me.. Just ask Christina Milian.

We’re getting the drop just two-days after Weezy was caught on tape getting checked as he and Christina Milian exited the rear exit of Supperclub L.A. — where Mack Maine’s birthday bash was held.

“As the Young Money CEO and Milian made their way to their ride a Crips gang member approaches the vehicle and yells Wayne’s name. Wayne pokes his head out of the vehicle for a second to see what was going on before his security closes his car door. Security held the guy back long enough to clear a path for Wayne’s car to pull off, but he continued to talk. He identifies his set, tells the rapper to “check in,” and disses Suge Knight and Birdman. “Magic n*gga, 87 Gangster n*gga, Crip,” he says while punching the car. “F*ck Suge n*gga, it’s Crip. N*gga’s can’t say sh*t. You can call who you want to, Birdman…anybody.”