HSK Exclusive – It’s been less than two-months since we broke first word of Lil Wayne being cheated out of of his Cash Money! Guess what? Weezy just set off some Twitter bombs that don’t only confirm our October report … the posts also reveal Wayne wants off the label!

According to our tipster …Cortez Bryant, Bryan “Birdman” Williams and disbarred entertainment lawyer Ron Sweeney are the culprits behind the alleged plot to get into Wayne’s pockets. We’re told Cortez Bryant recently spilled the beans to Wayne, exposing Birdman and Sweeney, while excluding himself from the sketchy equation. A source tells us … not only is Wayne pissed, he’s said to be suffering “financial ruin.”

“At the Cash Money meeting Wayne found out he was getting $10 million from Universal for his recording budget and Birdman was taking $9 million and he was only giving Wayne a million to record his albums. Sweeney and Birdman were taking 20% off Wayne’s show monies. He’s done with Cash Money.” 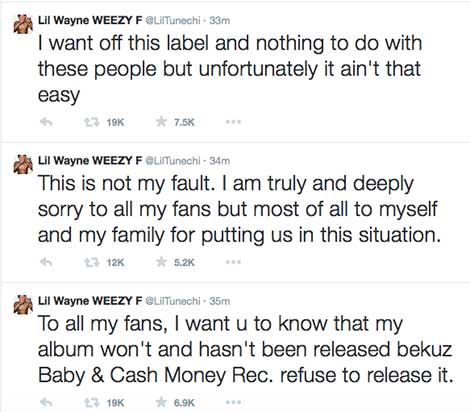