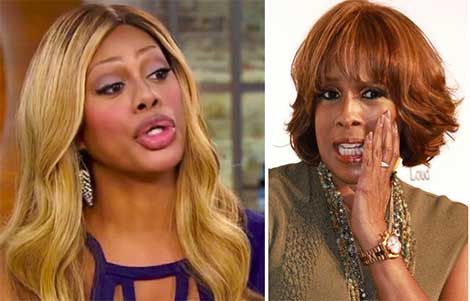 The transsexual actor who calls himself Laverne Cox corrected Oprah’s bestie, Gayle King who reminded him he was born a boy. The exchange occurred during Cox’s appearance on “CBS This Morning” Tuesday.

Cox, who is the first transsexual male to be nominated for an Emmy for “Orange is the New Black,” quickly corrected Gayle when she said, “So, you were born a boy…”

Cox told Gayle he was “assigned male at birth.” He said he always believed he was a female, despite the fact he was born an anatomical boy with male chromosomes.

Yahoo’s TV writer seemed offended that Gayle and her co-hosts were “a bit stuck on” asking Cox questions about being a transgender — as if it’s unusual for daytime talk show hosts to ask questions of a guest.

“It seemed that King and her co-anchors, Norah O’Donnell and Charlie Rose, were a bit stuck on Cox being transgender, asking her questions about when she knew she was a girl and many standard queries that any other transgender person has been asked a million times.”