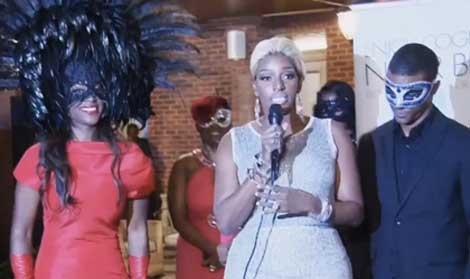 “To protect the integrity of Saving Our Daughters, our records show that we did not receive any of the proceeds raised from Ms. Moore’s masquerade ball.” ~Curtis Benjamin

Earlier today, Curtis Benjamin, Founder and CEO of Saving Our Daughters, released a statement on behalf of the organization in which he says the charity never received any money from the Masquerade Ball Kenya threw on their behalf.

Here is the statement from the Saving our Daughters charity:

From Saving Our Daughters.com
To all of our sponsors, contributors and friends

On February 16, 2014, Saving Our Daughters was mentioned on the episode of Real Housewives of Atlanta as being honored with a fundraiser on its behalf. Our charity was contacted by publicist April Love to get approval and give notice of this upcoming event. Much to our delight, we were indeed honored to be chosen.

Days later, to our surprise Ms. Love did contact me and inform me that she had decided to terminate her company’s involvement with this event. At that point, Ms. Moore contacted me to continue moving forward with the event as purposed and planned. This call took place a day before the event was scheduled to take place. Upon seeing the event unfold on TV, it was noticed that Ms. Kenya Moore stated that she was giving this charitable event in honor of Mrs. Leakes, with Saving Our Daughters as the recipient of the proceeds from the charity event. Honorees at this point were switched without our knowledge, but again, we are appreciative of any and all support for the organization. Had we been made aware that this fundraising event was in honor of Mrs. Leakes, we certainly would have been present with the plaques and certificates of appreciation that we currently have to present to Mrs. Leakes for her outstanding efforts and support for Saving Our Daughters. This would have been the perfect opportunity for us to honor her, as well.

We were not aware of this and it appears that Mrs. Leakes wasn’t aware either. The light in which Saving Our Daughters was depicted was less than favorable. The organization received several calls from other supporters about our involvement in this event. They were extremely disappointed and felt that the organization was being taken advantage of. We go on record by stating that we at Saving our Daughters have never and will not ever be involved in any drive where the exact purpose is not clear, stated or held to with only approved changes. We would not ever jeopardize our continuing support from our friends by being a part of what appears to have been tainted from the start.

In closing, Ms. Kenya Moore stated that thousands of dollars were raised at this event. To protect the integrity of Saving Our Daughters, our records show that we did not receive any of the proceeds raised from Ms. Moore’s masquerade ball. However, we do appreciate the contribution we did receive of $500 for our annual Christmas doll drive for children with cancer.