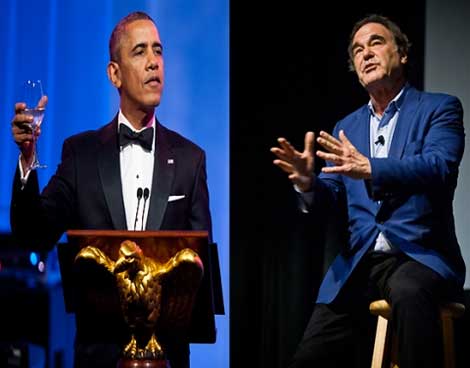 Oliver Stone, a left swinging Democrat of long standing and auteur behind “JFK “and “W.” films, is NO fan of the incumbent Prez. Stone accused Obama of breaking all of his pre-election promises during a panel discussion at the International Students for Liberty Conference in Washington, D.C.,.

“Something happened because none of the things he promised . . . transparency, a government that would reconsider the war on terror and these programs . . . none of that happened, none of it,” said Stone. “The man stunned us with a lack of spine,” the director added. “He is a weak man.”

Stoner also charged that Obama sold out immediately when he “took the private option over the public option”. He also said that Obama’s choice of advisers, Robert Gates, whom he labeled a “criminal,” and Hillary Clinton, made it clear right away that President Obama would be a completely different entity than candidate Obama. “On EVERYTHING he backed down,” Stone said. “I was stunned.”

This is not the first Stone has publicly slammed Obama. Last year, Stone told a Tokyo aud that Obama was a “snake” for “institutionalizing” illegal National Security Agency spy programs. “He’s a snake. And we have to turn on him,” said the filmmaker.