Actress Keke Palmer, who holds the title of the youngest talk show host in TV history, but maybe most known for her portrayal of Chili in the recent TLC biopic, was recently tapped to play the lead in the upcoming Broadway production of “Rogers & Hammerstein’s Cinderella.”

Palmer is the first African-American actress to play the role.

Here is what Palmer tweeted about it: 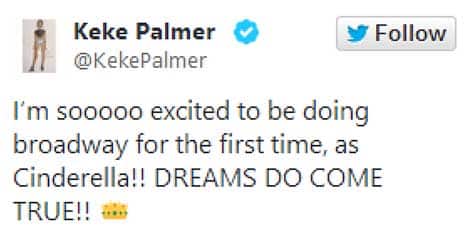 Palmer does give props to singer and actress Brandy for paving the way for her. Brandy played the role of Cinderella back in 1997 for television in a production by the late Whitney Houston. Palmer told the Associated Press, “I feel like the reason I’m able to do this is definitely because Brandy did it on TV.”

Palmer’s historical Broadway role comes on the heels of actor Norm Lewis’ casting as the first black men to play the Phantom in Broadway’s “The Phantom of the Opera.”