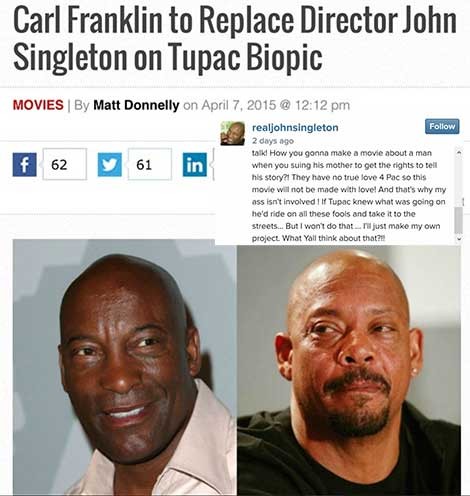 John Singleton says he’s got a big problem with the way the Tupac biopic is being packaged! And that’s not all! According to the ‘Boyz In The Hood’ director, if Tupac were alive today, the rap legend would be boycotting the film!

“If Tupac knew what was going on he’d ride on all these fools and take it to the streets!” ~ John Singleton

Singleton recently took to IG to put that word on blast. Just ask Carl Franklin. For those of you who may not already know … Franklin is the film director who Morgan Creek Pictures brought on board to replace Singleton, who had replaced Antoine Fuqua, and fill the director’s seat on the Tupac set.

“Real talk! The reason I am not making this picture is because the people involved aren’t really respectful of the legacy of Tupac Amaru Shakur. I won’t say much if you want you can read my articles in Hollywood Reporter on authenticity in Black Storytelling … To Pac’s real fans just know I am still planning a movie on Tupac … It doesn’t matter what they do mines will be better… Tupac was much more than a hip hop artist … He was a black man guided by his passions … Of most importance was his love of black people and culture … Something the people involved in this movie know nothing about… Real talk! How you gonna make a movie about a man when you suing his mother to get the rights to tell his story?! They have no true love 4 Pac so this movie will not be made with love! And that’s why my ass isn’t involved ! If Tupac knew what was going on he’d ride on all these fools and take it to the streets… But I won’t do that … I’ll just make my own project. What Yall think about that?!!