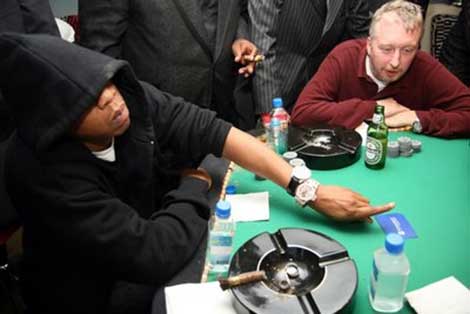 “For more than a decade Meneilly sat at the center of Jay Z’s notoriously tight inner circle.”

Jay Z’s track record of severing ties with people who’ve been there with him since the jump is growing! Industry insiders have revealed Jigga has kicked John Meneilly to the curb. According to one source, Meneilly didn’t want to go: “It wasn’t his choice.”

“Meneilly helped build Jay Z’s Roc Nation, which was born as a record label and transitioned into a talent agency. He also helped build the Rocawear clothing line before it was sold.
The former Provident Financial executive is largely credited with navigating the rise of the Rocawear clothing line, which Jay Z sold off for $200 million in 2007 while maintaining marketing and licensing rights. Meneilly is also credited as one of the architects behind Jay Z’s huge deal with Samsung last year, which instantly moved a million copies of the rapper’s “Magna Carta Holy Grail.” Meneilly was also a chief player at Roc Nation, which has grown from a record label to a talent management group that reps Yankee CC Sabathia and former Bronx Bomber Robinson Cano.

While Jay Z has always been reluctant to call Meneilly his “manager,” he referred to his once trusted confidant as his “consigliere,” according to Forbes writer Zack O’Malley Greenburg, who literally wrote the book on the Brooklyn music mogul.

When meeting with Meneilly to begin work on 2011’s “Empire State of Mind,” a book on Jay Z’s business philosophy, Greenburg recalls a down-to-business man who set the tone for the negotiation by immediately asking, “What’s in it for us?”

The “99 Problems” rapper is having a rough couple of weeks for sure. In addition to a surveillance video that went public of his sister-in-law pummeling him after the Met Ball gala in mid-May, photos of Jay and Bey sufaced in the Hamptons last weekend while his “Watch the Throne” collaborator Kanye West was marrying Kim Kardashian in Europe. Jay Z is also being sued for $7 million by an artist who says the rapper ripped off his Roc-A-Fella records logo design in 1995. Jay Z’s legal team is trying to postpone that case while Mr. and Mrs. Carter are on tour this summer.”