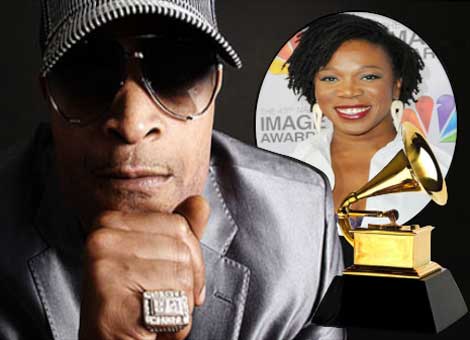 “The Grammys are NOT about the music.” -India Arie

HSK Exclusive – India Arie’s open letter citing the Grammys as a racist event is no revelation. The Grammys have always been Racist. I recognized that … back when I was a kid.

Let me take ya’ll back to a time when I was nine-years-old. Every Saturday, the sounds of Soul and Reggae filled the crib because moms would be cleaning to her records … Marvin, The Isleys, James Brown, Teddy Pendergrass and a lot of Bob Marley. But I was a funk child, always looking forward to the next new record one of my older brothers would bring home.

The night of the Grammys … I can’t remember the year, but I was in the forth grade. I was a nine-year-old kid who couldn’t wait to watch the Grammys that night. Know why? Because I thought I’d get to see performances from the Funk masters who made the music I loved [and still do]. Was I ever disappointed. I didn’t see any Ohio Players … no P-Funk … sh*t, not even the Commodores [before they sold out] were there!!! Matter fact, I can’t even remember if a Black band was there at all! But ya better believe there was Black music!!!

Check this: The Wild Cherry [White band] group performed “Play That Funky Music .” I was totally disgusted, watching the folks all stand up dancing to the lyrics ‘play that funky music white boy.’ That’s exactly when I first recognized what the Grammys is really all about. Again, I was nine-years-old.

It’s 2014 ya’ll, and my thing is this … Why are people like India Arie still riff’in about it? Is the Struggle not WAY BIGGER than the Grammys? I’m gonna state something right here … it’s deep, ya’ll … I want you to really think about it BEFORE you jump to judgement. Here it goes … Could it be Blacks who are bitching about the Grammys are doing so in hopes of landing ACCEPTANCE from their SLAVE MASTERS? And, when they do get the ACCEPTANCE they’ve yearned for … do those House Negros not only forget where they come from, they also forget the very people who supported them from grassroots?

With that said, check out India Arie’s cry for acceptance:

@Kendricklamar WAS robbed, BUT he was not the only one who was robbed. Personally, I was pleased he was able to perform and they KILLED! IT! One of the FEW moving moments of the night for ME.

Though it’s called “Music industries biggest night” the #Grammys are NOT about the music, it’s a popularity contest. The voting process allows people, to vote on name recognition alone – the music industry politics is a whole NUTHER conversation. Too much to go into here.

The American Music Awards is a show that awards sales and popularity – the #Grammys are SAID to be about the music.

If the hip hop community voted on hip hop – r&b COMMUNITY the same – same for each category – we’d see winners that reflect the MUSIC ITSELF. We all know that’s just not the way it goes.

NOW the BIGGER losers, are ALL of black music. Where was the black music community represented in last nights #Grammy show? Performers and Winners (or not) … Where were the black artists?

And this isn’t the first time the #Grammy’s has had a show all but excluding young black America and black artists in general, although we set the worlds musical trends. Why NOT televise the lifetime achievement awards of the Isley Brothers? SURELY they deserved to be on televised stage LAST NIGHT! While other artists were on stage TWICE?

The truth is in a perfect world diversity would matter, and respect would be rampant, but the TRUTH is, The #Grammys is a television show, and in THAT world ratings reign supreme. So, in general, bigger names take the stage, and sadly the biggest names often times ARE BIGGER drawn along racial lines from the release of an album. i.e. marketing dollars, and just general support. It’s unfortunate.

I don’t even get surprised any more, but, it still hits my sense of fairness, because I KNOW many of the artists who are overlooked. I LIVE in that world. We keep showing up and subjecting ourselves to the game, hoping MAYBE we’ll win. I was so HAPPY to see @Kendricklamar take that stage – because it is a FORM of winning, at LEAST, he was SEEN.

Speaking of diversity, congratulations to my PERSONAL favorite albums of the year-@I_GregoryPorter #LiquidSpirit @Realsnarkypuppy and @lalahhathaway on your win and THANK YOU! @pharrell for acting RIGHT in the presence of the greatness that is @Nilerodgers and #StevieWonder

P.S. No mention of Nelson Mandela at ALL? … and THIS is why we NEED the Image Awards AND the BET awards.