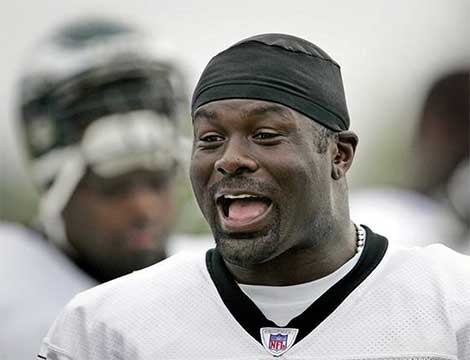 Former ESPN host and NFL great, Hugh Douglas, is currently being sued by his ex-mistress, Hope Davilia. Know why? Because, Douglas assaulted Davilia numerous times, including one incident at a Connecticut hotel last year when he picked up Davilia, by her neck and slammed her head into the hotel wall several times.

“She routinely invaded my privacy by examining my telephone and other electronic devices in an effort to learn of any other relationships I had with women.”

“Davilia explains that Douglas has refused to hand over documents during the discovery phase of the legal battle. She demanded he turn over all communications he had with another person regarding the hotel incident, all names of people who have accused him of assault or battery, tax returns for the years 2011 – present and all documentspertaining to his termination from ESPN in 2013 — and she says this is a violation of the courts order to exchange discovery.

Davilia states that Douglas is also refusing to sit down for a deposition and cancelled one scheduled earlier this month. She is demanding he be sanctioned by the court and ordered to hand over the docs she requested.”