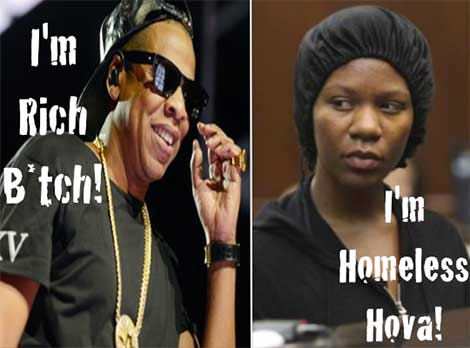 The homeless woman whose gained NYC media attention, after her recent arrest on child abandonment charges, has used the news coverage on her case to deliver a message to Jay Z.

“Is that rolling? Tell Shawn Corey Carter I said ‘F*ck him. Piece of sh*t”

Sources say… Frankea Aleasha Dabbs delivered her message to Jigga from inside of a Manhattan Criminal Court courtroom — after she turned to a television camera during her arraignment on Tuesday (July 8th). That’s one day after Dabbs was arrested on Monday (July 7th) — ” after leaving her seven-month-old daughter on a subway platform at the 59th Street and Columbus Circle station.” Cops say Dabbs arrived in NYC a few days before her arrest — after “the father of her child, Milini Edmonds was murdered in California.”

“Dabbs is charged with child abandonment and acting in a manner injurious to a child less than 17. She is considered a flight risk , according to prosecutors, due to her not having any friends or relatives in New York City.

Police released a statement shortly after her arrest explaining her actions… She came to New York City on July 2nd. She felt she couldn’t take care of the baby and thought she was leaving her in a safe public space.”