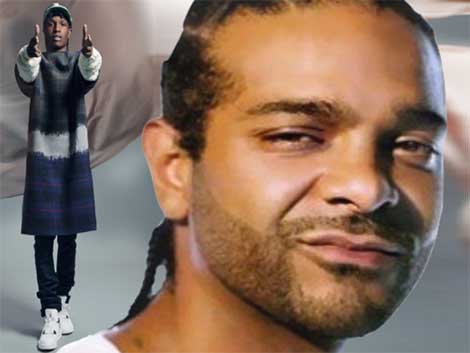 “We don’t wear kilts and we don’t wear tight sweatpants and funny sneakers. That’s not our style.”

Besides the fact that A$AP Rocky’s roots are based in Harlem, Jim Jones has let it be known that he and his the Vamp Life crew have NOTHING in common with dude’s Mob. Jim Jones has called out the major differences which he says sets he and the homeys apart from that Mob — including, A$AP Rocky’s feminine attire… and the ‘Crib In My Closet’ lyricist being a stranger to the streets. This, while Jim appears to elude to A$AP’s Mob movement is on an agenda that The Diplomats don’t back.

“They didn’t come up hanging and banging and hustling and really touching the pavement, ya dig? It’s a big difference.”

“Ten years ago, The Diplomats released their second and (so far) final album Diplomatic Immunity 2. Since then, A$AP Rocky and the A$AP Mob has taken the reigns as Harlem’s trendsetters in Hip Hop, something Jim Jones does not necessarily disagree with but does point out key differences between the two Harlem factions…”

“I’m not trying to disrespect them—A$AP Mob is doing it, they got their numbers and they’re doing what they like to do—but they’re nothing like the Diplomats…. Maybe the most influential—besides N.W.A—when it comes to everything. When it comes to style, we’re probably the most influential. I don’t recall no other group giving it to the world the way we was giving it to them.”