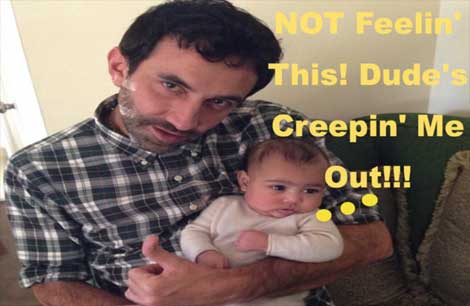 I don’t know about you guys, but it seems to me that “Uncle” Riccardo Tisci isn’t making a great impression with baby North. Don’t you agree?

The image was recently posted to Kim Kardashian’s Instagram account. According to a source, it was probably snapped during a quick visit by Kanye … with his bromance buddy in tow.

“Kanye doesn’t live with Kim. He spends most of his time with Riccardo.”

Here’s what a source told In Touch Magazine:

“Kim is still staying at her mother’s mansion in Calabasas, Calif. with baby North, Kanye is a 30-minute drive away at his bachelor pad in the Hollywood Hills until construction on their new home is complete. There’s too much chaos at Kris’ house for Kanye.

When Kanye does come by, it’s for a short period of time and not overnight. Kanye will come over to Kris’ for a few hours, but then go back to his place.”