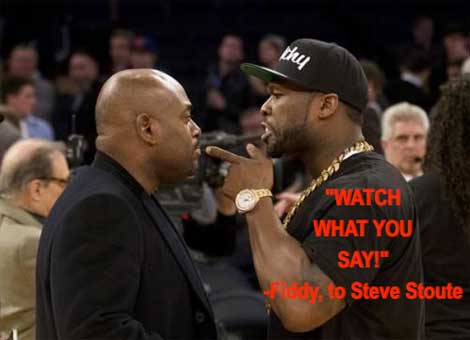 Not only do we now know what 50 Cent said to Steve Stoute — after the pair ran into each other on the Nets’ court, last month, the G-Unit founder is sending out a warning to the music exec who previously called him a “has-been”.

Fif — who says Stoute “is getting into shallow waters” — also questions why he is often viewed as a “bully” despite not being the one who started the dispute.

“I’m responding to it, to something ‘he’ said. Do we say good for him? If I smack fire out of him in front of everybody at Madison Square Garden, wow, where you see his skin d*mn near come off the side of his head, does anyone say good for him? Or do they go, ‘Oh man. Why 50 do that? He bullied him. You see how he did that?’ I don’t understand [the bully tag]. I don’t understand how you’re the bully for responding to someone else’s actions.

If the journalist pushes and pulls, pushes and pulls and at points asks the question – you didn’t force him to say it but it sets him up. It sets him up because it provides the opportunity for him to go down that actual lane and some of them are actually smart enough not to.”