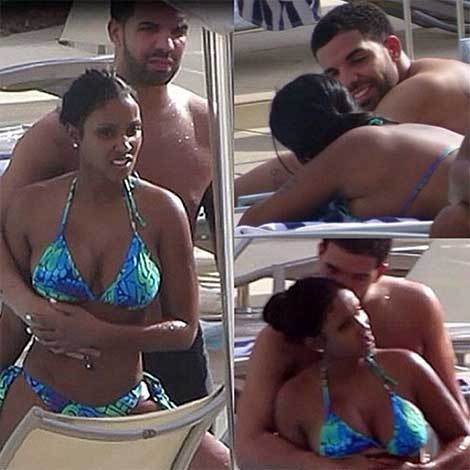 Drake is treating Instagram model/bartender, Bernice Burgos, to a vacation in Perth, Australia.

A source is saying Drake paid $10, 000 to the internet vixen, to take some time off from her bartender job at Starlet’s nightclub in New York City and vacation with him.

“Bernice is one of the very few bartender/vixen models that Drake frequently likes to invite on private getaways. Drizzy threats these girls likes his personal girlfriends.

He caters to their needs, he makes sure they’re well kept and pampered. Drake all see’s that they’re sexuality and financially rewarded.”

“Have you ever wondered how popular Instagram models can afford their lavish lifestyles? All of them post selfies in which they’re showing off expensive sports cars or vacationing in exotic locales, yet they all work low-paid jobs as bartenders or waitresses.

In 2015 we should stop gassing up these Instagram “Models” like they’re god sent. We are putting them on a pedestal for just showing ass. Too many #CaptainSaveAH*es defending them, like these b*tches got some special skills to satisfy you… Instagram model means prostitute, they might as well start to put their rates under the pictures because they won’t be fooling anyone for much longer. We are pro-prostitution. But we are against women who sell p*ssy and try to put down those who actually work and make a decent living calling them #Basic. We are against fraudulent hoes, pretentiousness and bigotry.

Most if not all Instagram models make their living by being sponsored, meaning they get paid to fly to Dubai and have sex with an Arab sheik and ten of his best buddies. But these hoes don’t simply rent their puss*es out for cash: they engage in some of the most disgusting sex acts you can imagine.*Tag the Sponsor*reveals*just what these girls are willing to do for a little extra spending money:

They’re willing to whore themselves out to rich Saudis with oil money. The Saudis pay anywhere from $10,000 to as much as $50,000 per girl for each trip which last anywhere from a weekend up to 2 weeks and they basically **** the **** out of the girls multiple times a day with with just about every fetish you could imagine including **** and pooping/peeing on the girls. The Saudis take pride in pooping/peeing on the girls and more often than not they make personal bets and hold contests to see who can get the most liquidy poop to drop on the girls faces, the winner gets to choose the next vacation spot and gets to pick his girls first.”