The Reality Of The Truth …

HSK Exclusive — They say the truth will set you free, but in Phaedra Parks’ $30M suit filed against Angela Stanton and VIBE, that doesn’t appear to apply to the notorious (and ousted) Real Housewives of Atlanta figure. Just ask James Radford, who could confirm that the proof is in the receipts! Those receipts, along with an exclusive first-hand account of the case, are now published and up for grabs for all to read!!! So it’s safe to say this: If Phaedra Parks had her way, there’d be a burning of all copies of “Dismissed With Prejudice: The Reality of the Truth” (the sequel to Stanton’s best-seller “Lies of a Real Housewife: Tell The Truth Shame The Devil”). Don’t believe us? Just ask Kandi Burruss.

In a previous report, you may recall we brought you counteractive word challenging Phaedra’s claim that she supposedly “won” the said three-year-long legal battle which ended on the note, “Dismissed With Prejudice.” Now, not only have the receipts, the deets, and the never before told account of the controversial $30M case “Phaedra C. Parks vs. Angela Stanton” been released in print and ebook form, court documented transcript of Phaedra Parks aka Phaedra Nida caught lying while under oath about her said knowledge of “Nida Fitness” (you know, that ‘donkey booty’ workout video fitness venture Phaedra and Apollo had featured on RHOA) is a telling of this lil tidbit being just the tip of the iceberg!!! The iceberg being Staton’s second tell-all DISMISSED WITH PREJUDICE: THE REALITY OF THE TRUTH.

“Phaedra can’t seem to remember how much she made from peddling “Nida Fitness” merch. But I’m so sure she remembers how much she spent to make it!”

Here’s an excerpt of transcript from the June 19th, 2014 deposition of Phaedra Parks deposition, featured in Dismissed With Prejudice: Reality of Truth:

RADFORD: Okay. You don’t think that your husband’s involvement in numerous financial crimes is relevant to the question of whether a reasonable person could believe that you are also involved in those crimes?
PARKS: No. it is not.
RADFORD: So, in your opinion, it has no relevance, is that right?
PARKS: Correct.
RADFORD: Okay. Have you had awareness that your husband was involved in criminal activities while those activities were going on?
PARKS: Again, I will not be answering that question.
RADFORD: Are you pleading the Fifth Amendment?
PARKS: I will not be answering any questions as it relates to my husband.
RADFORD: Alright. What is Nida Fitness, Incorporated? What is that? What is Nida Fitness Incorporated
PARKS: It sounds as if it’s a company.
RADFORD: Is that a company that you are involved in any way?
PARKS: No, sir.
RADFORD: Have you ever been involved in it?
PARKS: Not that I know of.
(DEFENDANT’S EXHIBIT 2 WAS MARKED FOR IDENTIFICATION)
RADFORD I’m going to show you what I’m marking as Defendant’s Exhibit 2. This is something I got from the Georgia Secretary of State’s website. It’s a record of 2013 corporation annual registration of Nida Fitness, Incorporated. And the CEO and CFO are listed as Apollo and Phaedra Nida. And there’s a section that says “authorized signature.” Besides that it says Phaedra Nida. Are you, in fact, a CEO or CFO for this organization?
PARKS: Oh, you’re talking about my exercise company. Okay. I’m sorry. I’m sorry. I was mistaken when you were saying something else. I do apologize.
RADFORD: What did you think I was saying?
PARKS: I didn’t know because your line of questioning had been so suspect, shall I say. So yeah, this is my exercise company.
RADFORD: Okay. And you and Apollo Nida are jointly the CEO of this company?
PARKS: On paper, yes.
RADFORD: Well, tell me, is there some difference between what’s on paper and what’s reality?
PARKS: I mean, I obviously have a workout company, and, you know, he is on the workout videos with me.
RADFORD: Okay. But does he have a formal relationship to the business? In other words, do you pay him to appear in the videos or does he have some interest in the business?
MR. ANDREW: That is two separate questions.
RADFORD: Does he have interest in the business?
PARKS: Yes, sir.
RADFORD: Okay. And you and him jointly own this business, is that correct?
PARKS: Yes; yes, sir.
RADFORD: What is this business? What is the business that this entity is engaged in?
PARKS: Exercise workout videos.
RADFORD: And anything else? I guess the production and sale of videos, is that a fair description of what this company does?
PARKS: Yes, sir.
RADFORD: Does this company do anything else beyond that, seminars, personal training, anything like that?
PARKS: Not that I’m aware of.
RADFORD: Okay. And you derive some income from this business?
PARKS: Yes, sir.
RADFORD: Okay. About how much income in 2013 did you derive from this business?
PARKS: I would have to look. I wouldn’t know off hand.
RADFORD: Just estimate.
PARKS: I would not know just to be very honest with you. I would not know.
RADFORD: More than a thousand dollars?
PARKS: I wouldn’t want to make an estimate without an accountant who handles this.
RADFORD: Okay. Who could I speak to to find that information?
PARKS: I would have to see who handles the finances for this company.
RADFORD: Who do you think it is?
PARKS: Probably Preston Business Management. 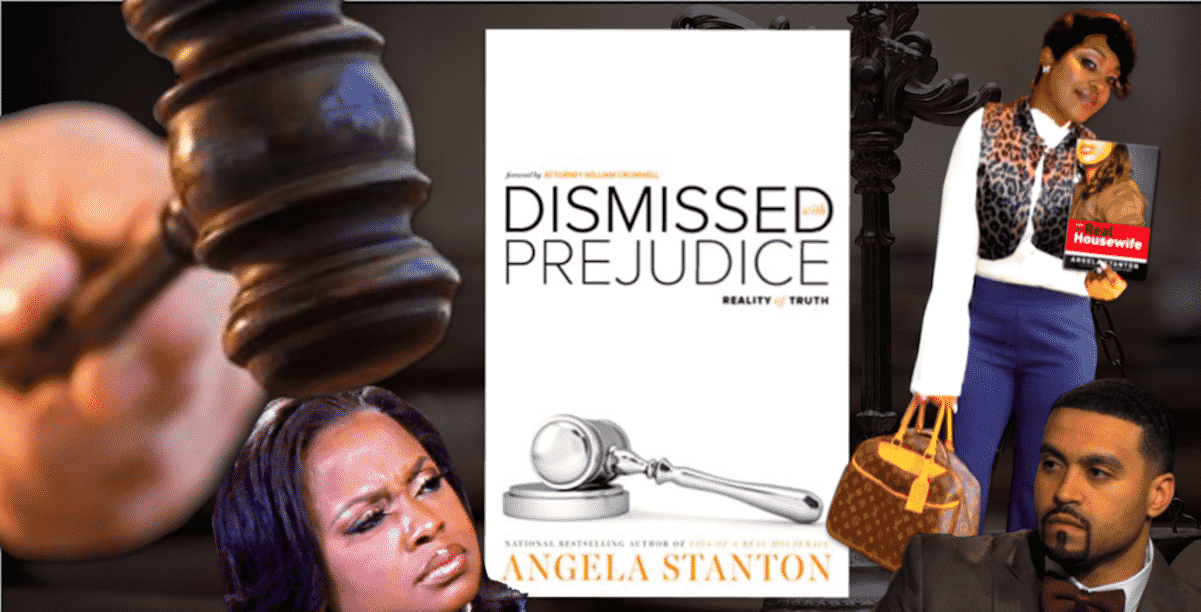 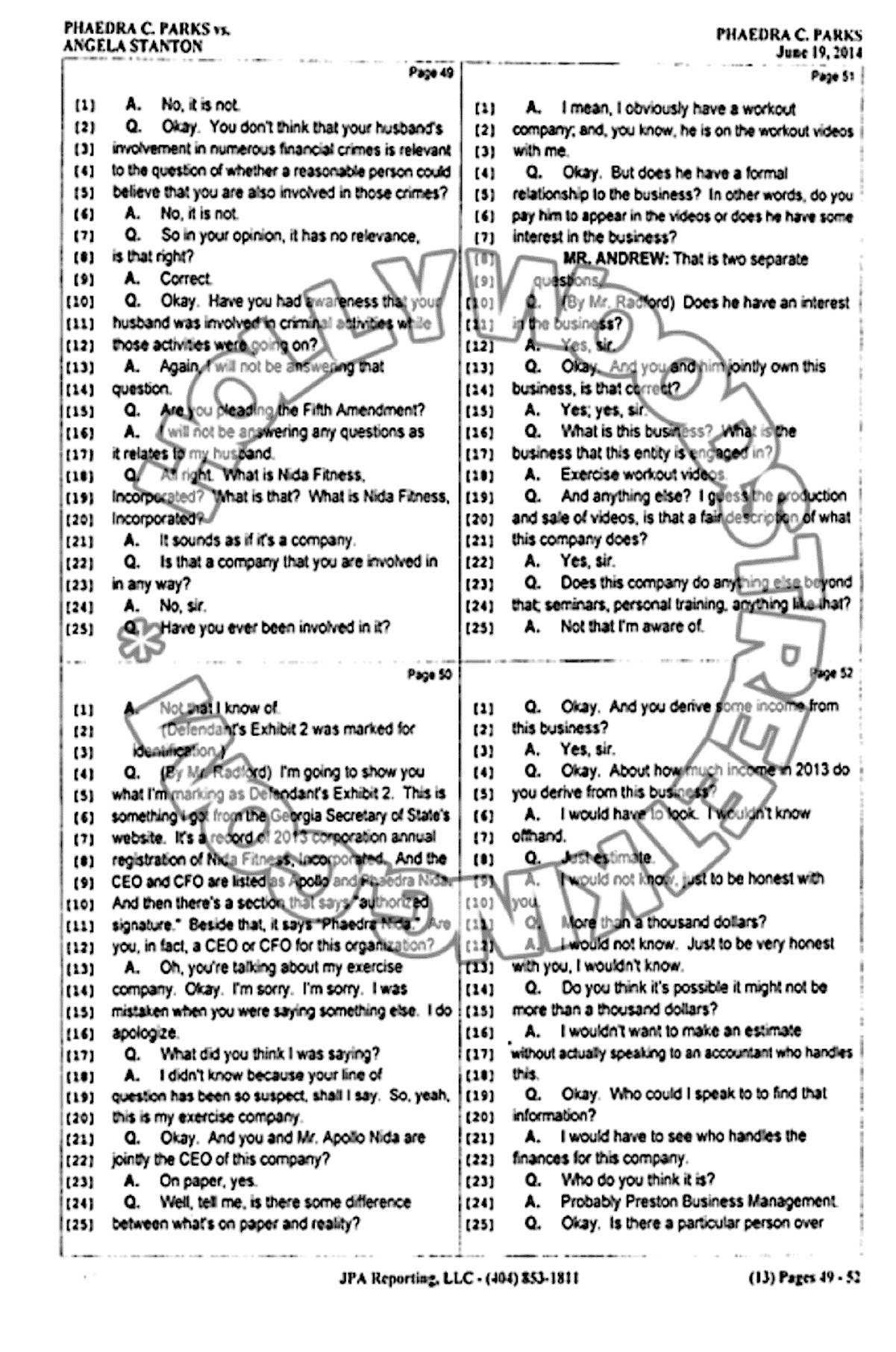