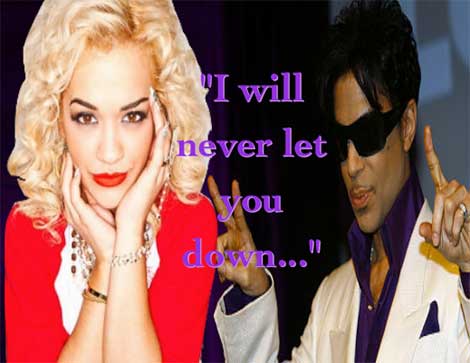 “I basically got a call from my management saying, ‘Prince would love to speak to Rita.’ And I was like, ‘Wait, like the actual Prince?” ~Rita Ora

Rita ‘Radioactive’ Ora has revealed she recently spent an entire week with the Purple Bandit.. at his Minneapolis residence/recording studios, Paisley Park. The British bombshell says her decision to take Prince up on his offer, “was the best thing I have ever done in my life.”

Here’s what Rita Ora, who’s been on hiatus for nearly two-years, had to say about her Purple experience:

“Yeah, we did a few tracks together. I flew to Minneapolis and went to Paisley Park, which is like his iconic studios and we just made music. I was there for a week.

He plays like 50 instruments so you could do anything and he’ll fix it. He has an answer for everything. He’s a genius.

When we connected I basically got [the call]…I went that night and met him and we listened to music and it was amazing.”