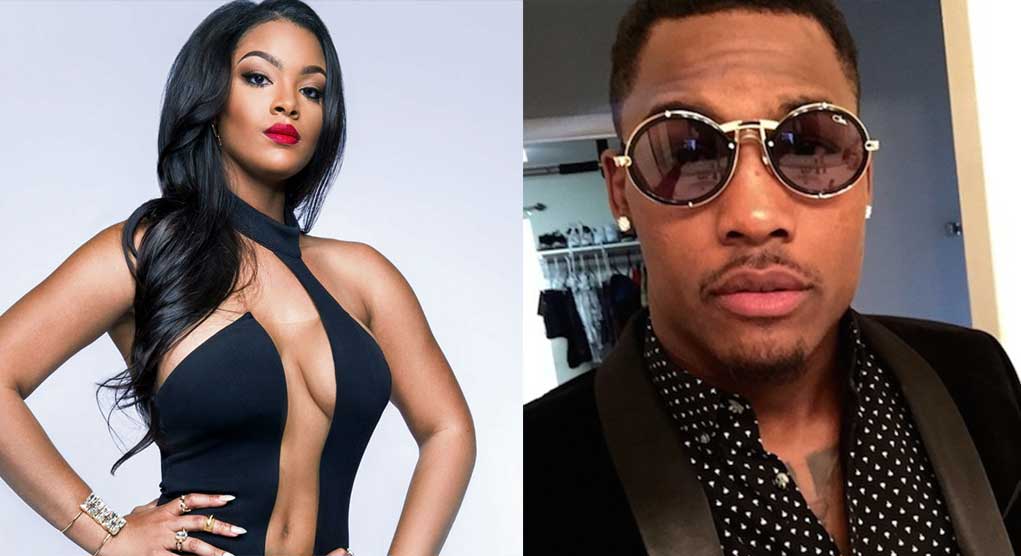 People started talking after Meghan James’ decided to blast Ferrari for being in her
home without permission. She probably is wishing she had just kept quiet…

Now, on to the tea about Jermall Charlo.

Jermall is a pro boxer and before he begin dating Meghan he was in a relationship with a  woman name Chriss Zoe.

According to Chriss Zoe, she left Jermall Charlo. after suffering a domestic violence by Jermall. On August 9th she posted about the abuse and opened up about it on
her Instagram. Chriss Zoe was living with Jermall Charlo. and lost everything including having to get an abortion.

Sometimes I blog about important topics ??‍♀️ Recently, a lot of women have reached out to me about their toxic relationships and I decided to open up in this blog about a few things I went through after mine was over. SHOPCHRISSZOE.COM> CHRISS ZOE > BLOG

Here’s an excerpt of the interview she did with her blogger friend about her relationship with Jermall Charlo.

In the blog post you wrote that opened up about your breakup, you mentioned some of the biggest issues in your relationship which were aggression, insecurity, immaturity, trust issues, controlling ways and jealousy, but very few people knew exactly what was really going on. Did you feel the need to mask those things in order to protect him?

I felt like we were working towards him being delivered from his issues so I felt the need to be quiet and to wait it out. He always told me not to tell our issues to people as well and it made sense. Looking back, I wouldn’t change that I hid it because I wasn’t ready to leave the relationship. I would have looked ignorant if I kept telling my business and going back to him.

He became very controlling. Him and his career came first, his wants, his family. Also controlling how you promoted your business, the time you spent with friends. Did it become difficult to remind yourself of your worth during the length of your relationship?

I knew my worth but I put him first. I believed in him and I was so hopeful that he would change for the better. I argued a lot with him because I knew my worth. I would literally fight for it so much that I would be exhausted by the end of the day from arguing and exerting energy towards our issues and his issues. I often tried to make my office my positive place and told everyone who walked in it to be positive or leave.

Before the abuse became physical, there was several instances of emotional and verbal abuse. Were you ever afraid that things would get physical?

You found out you were pregnant, how did you feel? Was it planned, were you frightened, was there excitement, was it made out of love?

We planned the pregnancy and when the test was positive I was happy, but scared. I began mentally preparing for it and I told my mother and of course friends and family. We both were happy about it but things went downhill once I began experiencing normal first trimester symptoms. He stressed me out, he wasn’t understanding, he was angry, upset, disliked that I was tired as hell and I couldn’t confide in him. When I heard the heartbeat at the doctors office I cried because I had never heard anything like it. When the nurse left he was angry and
asked why I was crying. His inability to have a heart in certain situations was horrible. I felt alone and like I was doing it all alone.

As women we naturally want to keep things in order and keep our relationships in tact. It’s difficult to expose the harsh realities of the situations we’re often in. Did what people thought of you stop you from walking away?

I knew I had to walk away for ME. If anyone had a different opinion I blocked them from my life. It was that easy. I’m stubborn when my mind, body and soul are connected and I knew immediately what needed to be done. People will be people and they will have opinions but we have to always do what’s best for us.

The night of the incident that caused your split, tell us what happened.

The night of the incident he became extremely belligerent and unable to identify with why he was even angry in the first place. He was rambling and making accusations and we began to argue. When I stopped arguing it made him even angrier. By the time we reached home he was screaming in my ear. His assistant
finally spoke up but did nothing else to help me. When he got out the car to take my wallet, keys and phone I tried to stop him which led to him punching me in the face. He also burst my lip which drew blood. After the incident he felt no remorse and was even still angry.

You had to pick up what you could and relocate back to Los Angeles in less than 24 hours. Describe the shock and difficulty that accompanied that decision.

When I woke up in the morning I was so numb that I was wandering around the house not knowing what to do. I left the house with no intentions of coming back but also no plan. I left with my wallet, keys and phone. That’s it. I called my
sister and we bought a flight for 6 pm. At 3 pm I went back to the house with police and friends and grabbed everything important that I could fit in my car. From there I went to the airport and never returned. It was the hardest thing I’ve done but I didn’t feel it because I put aside all my emotions.

What’s been the most difficult part of your healing process since moving back to LA?

Having to end my pregnancy was the hardest thing to heal from because I had a connection with my kid and even named “her”. I’m still dealing with emotions from it. Everything else is just there lingering in the air for now. I will deal with it just how I know… prayer has been my best friend and God has been my everything through this.

How has starting all over again made you feel? Empty or invincible?

I felt empty in the beginning because I literally lost everything I had except my life and immediate important things but now I feel invincible and like I need to speak up and be the person God put me here to be. I know there’s a female out there who needs me and it’s been my passion to motivate and encourage women because we are not treated well on this earth. Woman is strong and woman needs to know that.

What do you want women to take from what you’ve gone through?

I want my situation to help women understand how powerful they are. We don’t need to depend on a man because sometimes they have their best interest at heart. We love hard and we fall harder but when we get back up it’s gonna be a problem for everyone who’s involved.