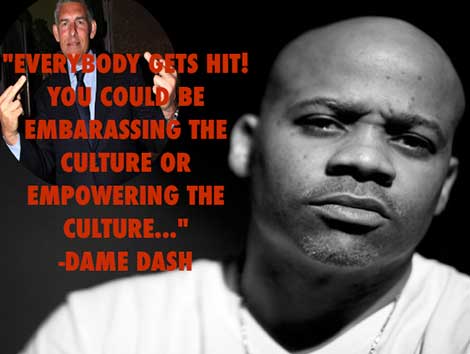 “Guys like Lyor Cohen were using people like Warner Brothers money to fund his personal issues…. and then Diddy got fired….”

Dame Dash is keeping it 100! He’s calling out all CEO’s who he says have laughed all the way to the bank over the “strategic humiliation” of rappers’ beefs. “I personally witnessed these things,” says Dame. “These people bully my culture and make money from it.”

Dame notes… the situation at hand is anything BUT Hip Hop! That’s why Dame is taking a stance, noting the time has come for us to reclaim what’s ours… take back our culture from the likes of Lyor Cohen, who he describes as a “Culture Vulture”.

“He’s culturally not from Hip Hop, so why do we allow him to make money in our culture? He’s benefited off the public perception of rappers having beef. I think we should have CEO Beef as opposed to making money off of rap beef.

I just don’t see why we can’t. Let’s have Hip Hop evolve and not have us fighting each other. Let’s deal with social issues and conscious issues. Let’s empower people and do right by the culture… lead by example.”

Check out some of what Dame Dash just put out there:

“I’ve been watching these people bully my culture… and make money from it… and I personally witnessed them do things that would humiliate the culture. People would die… and people would be hurt… and they would make money from it. I personally witnessed these things… and so I have issues and I’m not gonna leave the people behind, I want them to be aware of what’s going on.

These CEOs have made so much money off rap beef for so long. It’s not like when two rappers have a problem with each other they sit them down to squash it. They actually put a battery in their back. Sort of like a battery might have been in Flex’s back and have them beef with each other and then they make money off the winner.

As opposed to what I do when I see two people having a problem… I sit them in a room and I talk it through… and I try to let them see each others’ perspective and let them be aware that when the cameras are on and you’re influential you have to be conscious of the fact that what you do influences a lot people. So you could be embarrassing the culture or you can be empowering the culture… I’d prefer us to be empowering.

My issues at this very moment are there’s some people that I feel need to be stand accountable… and also I had to get my independent game correct. I was heavily invested in other people putting up money in cold ventures but I didn’t have control because they were putting up money.

And again… It’s been a very strategic game, I’ve witnessed it…. But when I decided not to be corporate anymore… use other people’s money… I knew what problems were gonna come with it. Like I’m from Harlem… like I’m never gonna hold a dollar ever regardless I’m always gonna put it in the street. I noticed that these corporate people were starting to try to bomb on me and make it look like I had a beef with a rapper to keep the beef off of them…

Guys like Lyor Cohen were using people like Warner Brothers money to fund his personal issues…. and then Diddy got fired…. and now he doesn’t have other people’s money to use to do all of those little corporate tricks that he used to do and I think he’s vulnerable…”