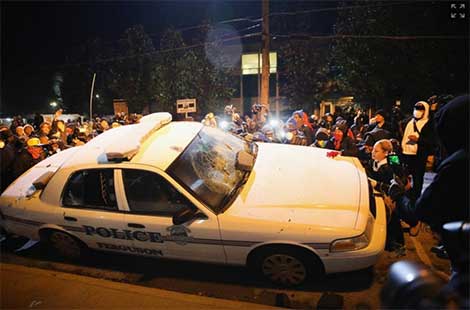 Charles Barkley has let it be known that he’s down with Darren Wilson’s team!

Yup, you read that right. Barkley was loud and clear when he took to a Philly radio show to support the Missouri grand jury’s decision to let Wilson walk.

“If it wasn’t for the cops we would be living in the wild, wild west in our neighborhoods.”

To top it all off, Barkley took up banging on Ferguson protesters in the process! “There is no excuse for people to be out there burning down people’s businesses,” he said. “Burning down police cars, the rioters are scumbags.”

Check out what Barkley had to say:

“We can’t pick out certain incidentals that don’t go our way and act like the cops are all bad. Do you know how bad some of these neighborhoods would be if it wasn’t for the cops.

The true story came out from the grand jury testimony. I can’t believe anything I hear on television anymore. And that’s why I don’t like talking about race issues with the media anymore, because they love this stuff, and lead people to jump to conclusions. The media shouldn’t do that. They never do that when Black people kill each other.”