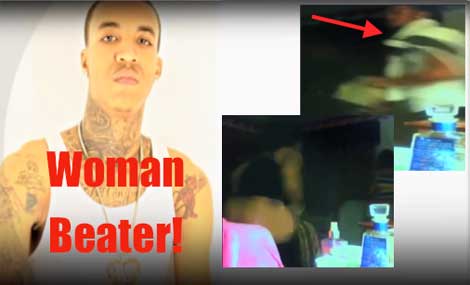 Details behind HBK’s Thanksgiving beat-down reveal the Doughboyz CashOut rapper could have been knocked out for laying his hands on a female, back in February. Know why? Earlier this year, Delon ‘HBK’ Person was caught on tape attacking one of two apparent call girls, inside of a Motor City motel room.

“Ya’ll coulda been fukkin’ with the wrong b!tches.”

That’s why payback is suspected to be the reason behind why HBK was clocked unconscious by a group of men, reported to have snatched dude’s chain. BOTH incidents were caught on camera … The latest being Delon ‘HBK’ Person getting hemmed up at a party in Detroit’s Cobo Hall, Thursday night.

The other tape, leaked back in February, exposes the CashOut crew beefing with a pair of apparent call girls — one of the two reported to have suffered a “broke wrist” by HBK’s aggression.

“The Detroit-based rap group found themselves in media spotlight back in February after motel footage surfaced showing the rappers involved in a physical confrontation with two women. Group member Crispy Quis took to Twitter to comment on the situation. DoughBoyz CashOut gained mainstream recognition after signing with Young Jeezy’s CTE imprint.”