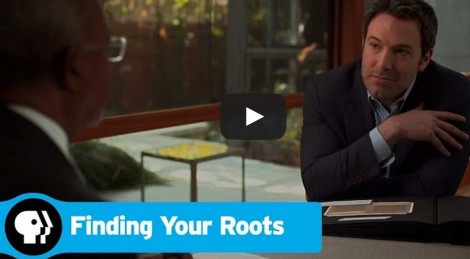 Ben Affleck has a slaveowner in his family tree. He was able to keep that a secret—until now.

An email conversation uncovered in the Wikileaks dump of the Sony Hack earlier this week shows that Affleck asked the producers of PBS’ Finding Your Roots series to scrub that ugly detail of his family history. The series, hosted by African-American studies professor Henry Louis Gates, Jr., traces the family history of famous Americans who appear on the show.

In emails with current Sony Pictures CEO Michael Lynton from July, Gates asks the Sony exec for advice on how to handle Affleck’s request. “[F]or the first time, one of our guests has asked us to edit out something about one of his ancestors–the fact that he owned slaves,” Gates wrote. “We’ve never had anyone ever try to censor or edit what we found. He’s a megastar. What do we do?”

“I would take it out if no one knows,” replied Lynton. “But if it gets out that you are editing the material based on this kind of sensitivity then it gets tricky.”

Affleck isn’t ever mentioned by name in the email, but a sly joke by Gates offers the reveal: “To do this would be a violation of PBS rules, actually, even for Batman.”

Here’s what PBS had to say:

“It is clear from the exchange how seriously Professor Gates takes editorial integrity. He has told us that after reviewing approximately ten hours of footage for the episode, he and his producers made an independent editorial judgment to choose the most compelling narrative. The range and depth of the stories on Finding Your Roots speak for themselves.”