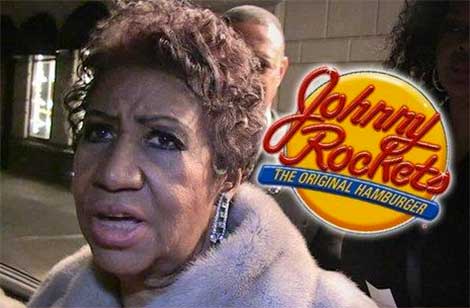 One Johnny Rockets server probably should have reconsidered coming between Aretha Franklin and her burger. Know why? Apparently, Aretha unleashed her infamous deviant diva on the kid… after he told her “she wasn’t allowed to eat her takeout inside” the burger spot.

“Franklin says in a statement that the worker was “very rude, unprofessional and nasty.”

“A spokesman for Franklin says the situation unfolded Tuesday at a Johnny Rockets restaurant on the Canadian side of Niagara Falls.

The spokesman says Franklin ordered a hamburger after performing a sold-out show. But he says the server screamed at Franklin, saying she couldn’t sit down to eat because she ordered takeout.

A Johnny Rockets spokeswoman says the franchise owner is sorry for the actions of “a new and very young employee.” She says the owner has spoken with the employee and has clarified his takeout policies.”