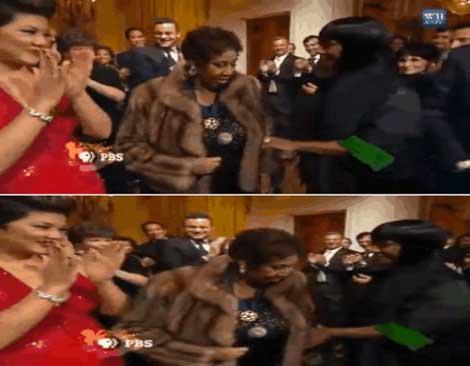 “She’s had beef with just about everybody in the record business — Dione, Tina… and even Luther!”

Aretha Franklin may have forgotten to check her attitude at the White House’s doors, for P.O.T.U.S.’s ‘Women of Soul’ concert. Just ask Patti LaBelle, who’s caught on camera catching MAJOR shade from Franklin!

It all went down this past Thursday (March 7, 2014). Insiders say a “backstage incident between Franklin and LaBelle” is what led to this…

Patti to Aretha: “Just because I have on a watch, don’t assume I have time for your bullsh!t”

Aretha to Patti: “Patti, you know we have beef, so let’s eat!”

Patti: “Aretha, ease on down the road with your Nipsey Russell looking ass”

Aretha to Patti: “Rupaul got jokes, I see. I’ma give you your props though. You look like you graduated from the Hogwarts School of Bitchcraft and Wiggatry.”

Patti: “I’m RuPaul but you look like you swallowed Eve AND Adam’s Apple. You’re built like a Deception!”