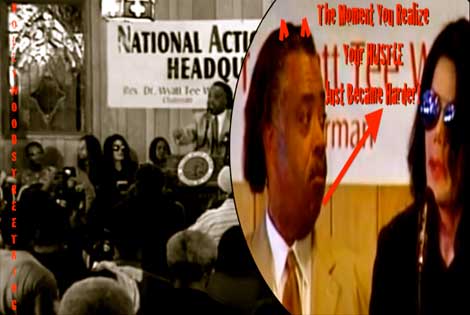 “He [MJ] surrounded himself with people who said yes simply to be around him or because they were cashing his checks.” ~ Tommy Motolla, “Hitmaker: The Man and His Music”

HSK Exclusive – Al Sharpton is being outed as one of the said many who pulled a straight pimp move on the late King Of Pop!!!

“Reverend Al is a pretty worthless piece of sh*t scumbag.”

This news comes more than a decade after Al Sharpton appeared to stand firmly behind Michael Jackson’s 2002 mission to put the music industry on blast for its “incredible injustice.”

“We were already ‘Off The Wall’ and we’re coming off our seats to stand up for justice in the music industry.” ~ Rev. Al Sharpton, June 2002

“Like Al Sharpton was saying, people from James Brown to Sammy Davis Jr., to some of the real pioneers that inspired me to be the entertainer that I am … these artists are always on tour because if they stop they’ll go totally broke.” ~ Michael Jackson

You’ll recall Sharpton’s ‘National Action Network Headquarters’ was where Michael Jackson took to the pulpit, citing Sony’s then-Music Chief as “a mean, racist, devilish” character. Now, an insider has surfaced to reveal the ‘Good Reverend’ later didn’t miss a Beat in secretly accepting a check to Beat It!

“I have known Tommy for 15 or 20 years, and never once have I known him to say or do anything that would be considered racist.” ~ Rev. Al Sharpton, “Leaving MJ Out In The Cold”

“He shook down Tommy Mottola of Sony when MJ came to visit him in Harlem. It died down real quick because he went straight to Tommy and got a check leaving MJ out in the cold. Recently, he states that people let MJ down. Enough for now…”

“I’ll never forget when Michael came to the National Action Network, and without warning attacked Tommy. Tommy called me right after the rally and said, “What was that all about?” And I could understand where he was coming from, because Tommy had done more than most record company executives and company presidents in his time to push the boundaries for artists, including Michael, who were black. Tommy had been extremely progressive on these issues. And on top of that, you always knew exactly where you were with Tommy. His yes was a yes. His no was a no. He never promised me something that he didn’t deliver.

I told him, “Michael feels that Sony is not being fair to him, and he feels that everyone is trying to take the catalog from him.” Tommy said, “I will answer any question you want. But I cannot make numbers and sales that are not there. His own people are not giving him the right information.” Tommy laid out the whole picture and showed me a lot of things that Michael didn’t know: people on his side who were double-dipping, and people telling him things that weren’t there.

I told Michael, and I told Johnnie Cochran, who was representing Michael. Tommy was genuinely hurt that Michael didn’t understand that Tommy was doing everything he could do for that album based on the business and the circumstances. He genuinely wanted Michael to understand where he was with it all. It was beyond an executive being attacked in the press. He wanted Michael to know that he really cared about him.”