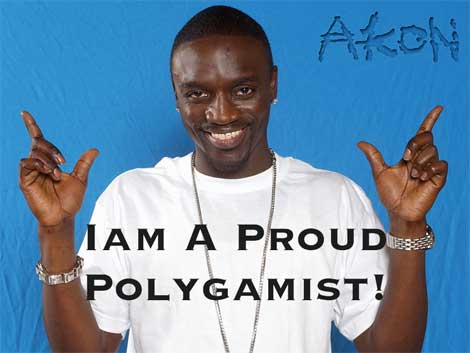 Akon says practicing polygamy is something that “all Africans believe in” … but I smell a misogynistic who’s hiding behind a religion that he has absolutely NOTHING to do with. Know why? Because a religious man would not create a legacy of lyrical content including, “Smack that all on the floor/ Smack that give me some more/ Smack that ’till you get sore/ Smack that oh-oh!”

To be sure, Akon openly admitted to his unconventional practices years ago — but for whatever reason he appears to want to remind us all of his distorted “barefoot and pregnant” views of Woman.

“I can have as many wives and children as I can afford.” ~Akon

Here’s what Akon had to say:

Was Akon about to lock down wife number four … before she jumped out the window and exposed the rapper for NOT residing with his wives, who “live in other parts of the world”? Of course! Don’t believe me.. Just ask Rachel Ritfield.