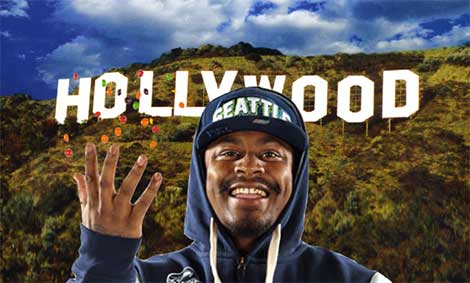 HSK Exclusive – Marshawn Lynchis revealed to have his mind set on becoming “the next Denzel Washington”. That’s why the NFL running back didn’t join his Seattle Seahawks teammates for their White House trip to kick it with President Obama.

Back on May 21st… you’ll recall reports put out word that “Obama lamented that running back Marshawn Lynch was not in attendance.” Now, a source tells us. Lynch was too busy in Oakland ” filming a low budget, amateur film titled “Family First”.” Don’t believe me.. Jusmt ask director Mario Bobino.

“Marshawn Lynch is playing himself in the film and he’s the only person of relevance in the movie. He really believes it’s gonna be a blockbuster but I’m hearing that it’s going straight to Red Box or Hulu.”

“Marshawn is delusional. He thinks he has a second career in acting.

Mario Bobino is a bum…nobody in Hollywood takes him serious as a director.

Mistah Fab is in the movie too and the whole cast of nobodies thinking the movie soundtrack is dope. I’ve heard some tracks that’s going to be featured on the soundtrack and it was weak.”