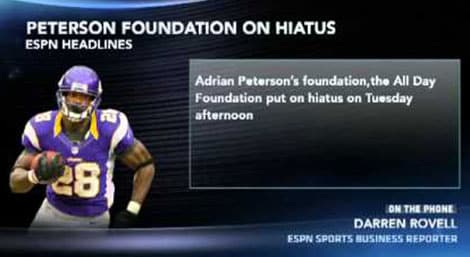 Adrian Peterson, the star running back for the Minnesota Vikings, who is currently on the NFL’s exemption list following allegations of child abuse, paid for four hookers using his All Day Foundation charity connected credit card.

“One night when Peterson and two of his relatives, including his younger brother, stayed in an Eden Prairie, MN hotel with four women, engaging in debauchery charged to a credit card connected with Peterson’s charity. They were drinking, arguing and sex that involved the running back, two relatives — including Peterson’s brother, a minor — and four women, in various pairs.

One of those present, Chris Brown, a Peterson relative who lives with him in Eden Prairie, told police that he paid for the room using a company credit card for Peterson’s All Day, Inc.

As the night wore on, one woman who said she knew Peterson previously became upset when she saw him having sex with another woman. She started an argument that lasted at least an hour.

When she told him that she was ’emotionally attached to him,’ Peterson reminded her that he was engaged to another woman and had a baby. The next day one of the women filed a police complaint that was investigated for months.”