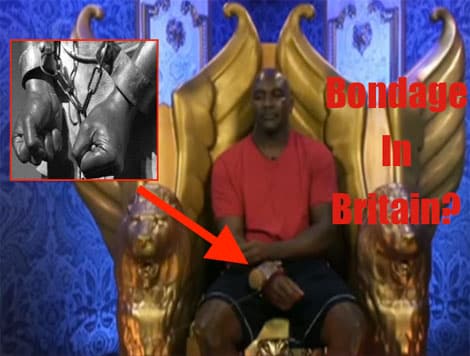 “The mantra of the moment is, ‘Of course I believe in free speech—BUT…’ And the “buts” are getting bigger … Even in the Land of the Free and the First Amendment, the ‘Free Speech, BUT’ group has been gaining ground.” -Mike Hume, Veteran British Journalist

HSK Exclusive – Evander Holyfield recently expressed his personal opinion of why he thinks homosexuality is wrong. Though many may not agree with the boxing icon’s stance — like anyone else — the Brother should be entitled to an opinion, right? Well that’s not how the proven censorship committee over at ‘UK Celebrity Big Brother’ see it.

“[We] must therefore warn you [Holyfield] to consider very carefully the effect expressing such views may have and the harm and offense you may cause by repeating these views inside the house.” ~ UK Celebrity Big Brother

That’s what the real story may not be Holyfield’s statement, but rather could lie in the fact that producers of the ‘reality show’ had dude shackled to a chair — while telling a grown azz Black Man (the only Black person in the Big Brother house) what he can and cannot say inside their European digs. To be sure, we’re talking about a society reported to rep ‘freedom of opinion and expression’ in its ‘European Convention on Human Rights’ — said to “mirror” that of article 19 of ‘The United Nations Universal Declaration of Human Rights.’

“Everyone has the right to freedom of opinion and expression; this right includes freedom to hold opinions without interference and to seek, receive and impart information and ideas through any media and regardless of frontiers.” ~ The United Nations Universal Declaration of Human Rights, Article 19

Here’s what Holyfield said about homosexuality, during Sunday’s broadcast:

“The Bible lets you know that’s wrong, that’s right. If you were born and your leg was turned this way, what do you do? You go to the doctor and get it fixed back right, right? You know how handicapped people are born. Now you can’t say, because they were born that way, you can’t move. It is a choice. You ain’t gay unless you’re sleeping with the opposite sex. That ain’t the way the body is made.”

Here’s what producers of the show had to say to Holyfield:

“Before you entered the Big Brother house, the rules regarding unacceptable language and behavior were explained to you. Last night, in a conversation with Louisa, you expressed the view that being gay was normal and that it could be fixed. While Big Brother understands these are the views you hold, they aren’t the views that I hope our last section of society, in expressing these views, will be extremely offensive to many people. Big Brother does not tolerate the use of offensive language.”

Is ‘UK Celebrity Big Brother’ a show that landed successful ratings after a racist queue was formed against one of the housemates? Of course … Just ask Shilpa Shetty. 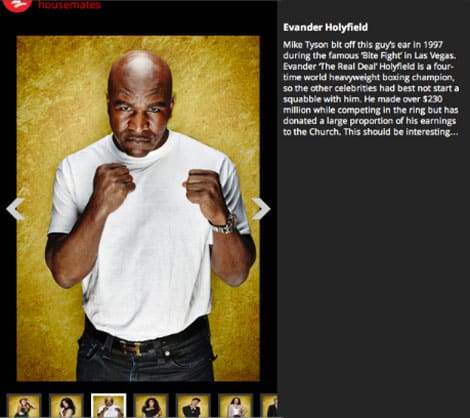