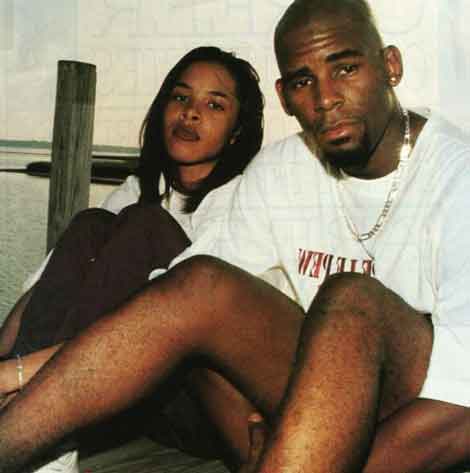 HSK Exclusive – For years, inquiring minds have been asking, why R Kelly married an underage Aaliyah, only for the marriage to end in a sudden annulment?

Now, sources close to Mr. Bump & Grind say, not only did R. Kelly believe he impregnated Aaliyah, but he also left the now deceased songstress with an STD. And guess what? We’re told the marriage was meant to be a cover-up – the only way R Kelly and his staff believed he could dodge a sex scandal.

Here’s what an insider from R Kelly’s camp had to say:

“Rob was sneaking and banging a underage Aaliyah, during and after recording sessions.

Aaliyah’s family basically turned her over to Kels with no supervision. All hell broke loose, two months later when she missed her period.

Kelly’s handlers saw visions of their cash cow and his protege’s career going down in flames. Statutory rape ain’t no joke. They lied about her age, snuck off and got married so she could not testify against her husband. It was all for nothing because she wasn’t really pregnant.

Nasty ass Kels had just given her some type of VD that made her miss her monthly. They got the union annulled with the quickness and Kelly sent lil’ Aaliyah back home.

Jacky, if you don’t believe me ask Barry Hankerson.”

R Kelly is a disgusting man who deserves to be castrated. Know why? Because we all saw proof of R Kelly abusing underage girls. Don’t believe me.. Ask Demetrius Smith.