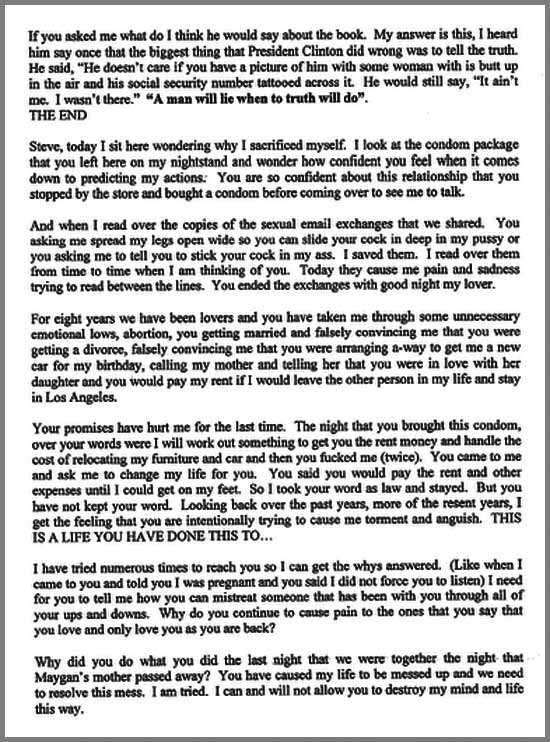 Steve Harvey has been exposed as a cheating husband. The dirty details, dug up by the ex-wife of the comedian (who never made me laugh) and mother of his teen son, reveal Harvey is a man with a temper, who cheated on her for 15-years…and that when he landed his success, he quickly forgot where he came from.

Mary Lee Harvey reportedly met Steve while she was working at a department store cosmetics counter, back in 1989. That’s when Mary says the pair were living a challenging life…sleeping in their car and stealing gas so Steve could commute to his stand-up gigs. By 1996, when the couple finally generated some money, they tied the knot. That’s when Mary says Steve sparked several extra-marital affairs…and wasn’t exactly discreet about them. One of those affairs lasted eight long years. Mary found out about that secret relationship when she found a letter written by a named Terry to Steve (we have that letter for you below), exposing Steve supported an abortion of the child Terry was carrying (which was his) and that Steve likes to smash the ass. To add to the drama, Steve was also smashing another woman during his marriage to Mary. That woman, named Marjorie, is now married to Steve.

Mary eventually grew tired of all the drama, and decided to leave the relationship. That’s when she says Steve took their son, Wynton (who Mary says received more than his share of whop-ass at the hands of his father) and turned the lil man against Mary. To add insult to injury, Mary says Steve evicted her from their home, took all of the money and property and refused to divide the businesses with her, which they built together…leaving her with nothing.

Here’s what Steve Harvey’s lawyer has to say:

“We are appalled and aware of the videos and other fabricated documents…which contained false, misleading, derogatory, disparaging, malicious, explicit and slanderous information about Mr. Harvey, his current wife and others. The ex-wife is fully aware of the court’s current orders and permanent injunctions which prohibit either party, their lawyers or representatives from discussing and releasing information on the Internet and to the media. We are taking the necessary legal steps to rectify this matter to the full extent of the law and we will be seeking contempt and sanctions against her for such reprehensible and callous disregard for the court orders. We are saddened that the ex-wife has resorted to such devious and selfish behavior, with a reckless disregard for their minor son, her adult son and Mr. Harvey’s other children.”

Here’s what I gotta say: The nerve of this guy Steve Harvey. Here’s a dude who said he hates Gangsta rap because he says rappers talk about women in a negative way, but guess who doesn’t practice what he preaches? Not only is Steve now exposed as philanderer, but he’s exposed as an abuser of women. How disgusting is that? To make matter worse, Steve was physically abusing his son, while having his unborn child aborted. Steve Harvey is not only a scumbag and hypocrite, but he’s also a liar! So if your bought his book “Act Like A Lady, Think Like A Man” you should burn it! And if you hear Steve running his mouth on his bullshit radio show, you should turn to another station. Know why? Because Steve Harvey is a devil in disguise. Don’t you agree?