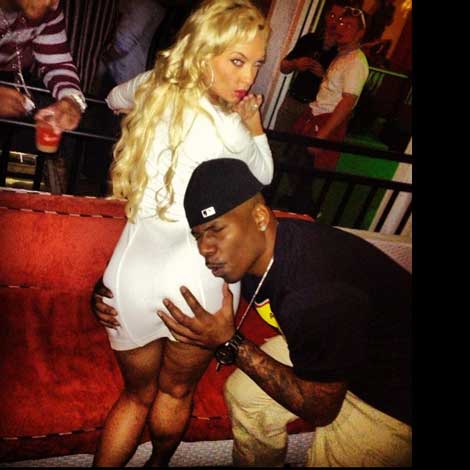 Beyond The Peep Show?

HSK Exclusive – What happens in Vegas may not necessary stay in Vegas for Ice T’s wife Nicole “Coco” Austin. That’s because the rapper at the center of a set of scandalous pics with the Peep Show headliner says he and the former model did the do — RAW DOG!!! That’s before we’re told Coco ended her reported “one night stand” with AP.9, leaving Sin City’s Wynn Hotel first thing in the morning to meet with her mother and sister.

This news comes almost three-months after the first set of images of the pair – looking very up close and personal – were leaked. You may recall reports revealed Coco and AP.9’s hook-up happened within the first week of Coco moving to Las Vegas to fill an interim ‘Peep Show’ spot, with Holly Madison on maternity leave.

Now, AP.9 is revealing the dirty details surrounding his Coco experience — and we’re told the rapper’s recount of the set of events is set to be published in Star Magazine.

“I met Coco the first week she arrived in Las Vegas for her ‘Peep Show’ rehearsals. After that, I would drop by Planet Hollywood to see her.

One night at the club, she asked me, ‘What are you doing after the club?.’ We ended up going back to the Wynn and I f–cked her without a condom. It was early December, I think it was the 6th. Coco left the room at five or six in the morning. She told me she had to go meet her mother and sister.”

“I first met Coco at Surrender Nightclub. She invited me to her table; I had a couple of drinks; we exchanged numbers. I could tell we had a physical attraction. She asked me, ‘What are you doing after the club?’ I said, ‘I’m probably just going to get a room and stay right here.’ She said, ‘Well, I’m going with you.’

We had sex. I don’t know who made the first move. It wasn’t making love; it was just sex. We had sex unprotected. I really hope she isn’t pregnant!

She did an interview and said, ‘Oh, he was a superfan, everywhere I went he showed up and ran up to me talking pictures. She threw me under the bus like I was some groupie stalking her.

Ice-T called me and said, ‘My wife wouldn’t f**k with you. You need to tell the truth because my wife wouldn’t do that.’ So I told Ice-T: ‘You want the truth? OK. Me and your wife had sex!’ I got respect for Ice, and I’m not mad at her. But don’t lie about me. Everyone is looking at me like I’m the bad guy.