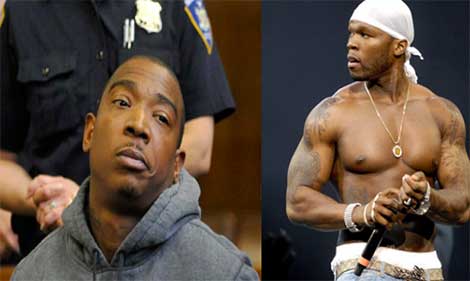 “He secretly led them through his recordings for the answers they were looking for.” -Ja Rule, “Unruly: The Highs and Lows of Being a Man”

Ja Rule has emerged out of the shadows with a new book that pegs 50 Cent as a rat, who could have played a major role in the demise of Murder Inc.

According to the read titled ‘Unruly: The Highs and Lows of Being a Man’… 50 Cent cooperated with the Feds to build a case against him, Irv Gotti and Murder Inc…

“When they (the feds) asked him who he thought had shot him, it would make sense that 50 would have said, ‘Ja Rule, Irv Gotti and Murder Inc.,’ ” writes Ja Rule, referring to a 2000 attack that left Fitty hospitalized with nine gunshot wounds.

50 Cent later said he never cooperated with law enforcement, even when they came to him trying to make a case against Ja Rule’s rap-mogul colleagues Irv “Gotti” Lorenzo and Irv’s brother Chris, who were eventually acquitted of laundering drug money through their label, Murder Inc., in 2005.”