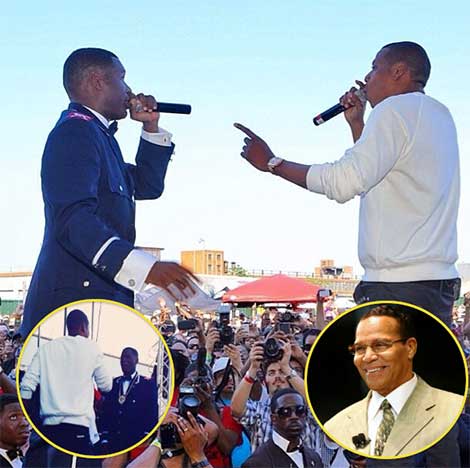 “Let us be the first to exemplify what we are encouraging Jay Electronica and other Muslims, and our people, to do.” -Louis Farrakhan

​The Honorable Minister Louis Farrakhan has addresses the sharp criticism ​Jay Electronica received over his cameo performance at The Brooklyn Hip-Hop Festival​. ​To be sure… not only did Jay E. show up at the July 12th concert deep, with The Fruit of Islam Brothers, the event also marked the date when Hovi’s gave up his Five-Percent Nation medallion. Just ask Saladin Allah.

“As persons who have accepted righteousness as our standard of intellectual and moral conduct are considered “those who are striving to be upright,” then there is much room in all of us for improvement.” -Louis Farrakhan

Reports reveal.. “​The performance had some fans divided because Jay Electronica wore an outfit representing the Nation of Islam and then got onstage and performed songs with vulgar language.

​Some fans got even more irate when Jay Z appeared and presented Electronica with a Five Percenters chain while the foul language persisted.”​ But According to Minister Farrakhan’s recent open message… what went down on that stage could have been anything BUT what critics claim. “I am very proud of the Fruit of Islam (F.O.I.) and the Believers who stood with Brother Jay Electronica as he delivered what he delivered to the people gathered in Brooklyn at The Hip Hop Festival in New York​,” states Minister Farrakhan. 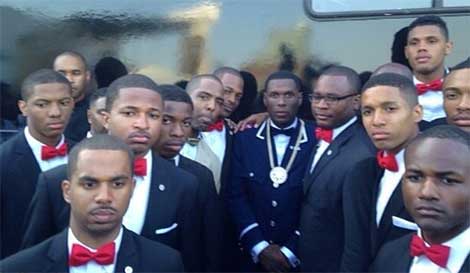 Special Note—After making this statement, Minister Farrakhan wanted to impart the following to the readers: “Below is just a humble and loving communique to all who are followers of Islam and students of the Honorable Elijah Muhammad under my leadership. And to all of our people who knowingly and unknowingly are involved in a process bigger than themselves (The Resurrection).”

I am very proud of the Fruit of Islam (F.O.I.) and the Believers who stood with Brother Jay Electronica as he delivered what he delivered to the people gathered in Brooklyn at The Hip Hop Festival in New York.

I understand that some criticized Brother Jay Electronica’s use of profanity while wearing the uniform of the Fruit of Islam (F.O.I.) of The Nation of Islam.  I humbly and respectfully ask:  Has any of us who have accepted Islam and its required high degree of moral excellence and civilization ever said or done anything that is less than representative of what we believe?  I am sure that all of us, if we are honest, would have to say that we have.  Is the uniform that represents us as the Muslim Girls Training and General Civilization Class (M.G.T.) or F.O.I. more important than that which we say we believe and should represent 24 hours a day?  If we violate our own teachings or make mistakes in how we handle our teachings and ourselves with respect to our moral teachings, do we not expect and desire Allah (God) to be forgiving and merciful to us, particularly if we petition for His forgiveness?  Of course we do. (Read Holy Qur’an, Surah 26 “The Poets,” verses 78-82 – Abraham speaking of and to The Lord of The Worlds)

So if any of us have said anything that is offensive in the dialogue that has ensued, in these closing days of our Ramadan fast, let us ask Allah (God) to forgive us, for I am sure that for most of us the intention of our hearts was not to do evil but to encourage a better representation, a more perfect representation of what we believe.  Then let us be the first to exemplify what we are encouraging Jay Electronica and other Muslims, and our people, to do.

The Messiah is One Who is encouraging the steps that each and every human being makes in the process of reconciliation to God and resurrection to our original position with Him.  I am like a parent who is watching the steps that our people are making and that we are making in the process of resurrection.  What parent seeing its child making its first steps walking toward its mother and father dressed in a diaper that needs changing will think of the diaper change?  No parent will think of the diaper change; the parent will praise the steps that the child is making, knowing that the parents still have a little more work to do in teaching and training that the child may one day be “potty trained.”

Jesus, in The Gospel (John 8:1-11), gave a beautiful picture that describes our work today. A woman was found in adultery and brought to Jesus for Jesus to agree the adultery she was found in, according to the law sent down by Moses, required that she should be stoned to death.  All of those who came had their stones ready—but Jesus, The Messiah, kneeled down and wrote in the sand, “He who is without sin, let him cast the first stone.”  And none of those who came to stone her could throw a stone.  Being perfect in his righteousness, Jesus said, “Woman, where are your accusers?  Neither do I accuse you”; then he gave this command to her, “Go and sin no more.”

The Work of The Messiah is to reconcile fallen man into oneness with God.  That is a process that puts all who are a part of The Messiah’s Work on a journey that is exceedingly difficult.  Sometimes we are up, sometimes we are down; but nevertheless, we are encouraged to get up, dust off, and keep moving toward the goal.  So let us not be like the self-righteous hypocrites of that day when Jesus refused to accuse the woman whom they say was found in adultery.  Let us not strain at “a gnat,” and swallow “the camel” of our own evil.

I am grateful to Allah for my young brother and his effort to represent that which he has come into the knowledge of.  I am thankful to Allah for his work among the youth!  Is it not they whom Allah desires for us to save from the evil intentions of our and their enemy?

So let us in this month of Ramadan, this month of fasting where we deny ourselves that which is natural (food and drink and companionship with our mates during the daylight hours); let us who are fasting from the natural desires to give us strength to overcome the unnatural desires of stealing and lying and cheating and covetousness and the evil of this world’s life:  Let us ask Allah’s (God’s) forgiveness.  And as we ask it for ourselves, let us be quick to forgive others as well.

In closing:  I was one of the 85 Percent, according to our Lessons, deceived by the 10 Percent; but when I met the Honorable Elijah Muhammad, and bore witness to him and The Great Mahdi, Master Fard Muhammad, to Whom praise is due forever, I became one of the 5 Percent, “The Poor Righteous Teachers,” who know The Law of Cause and Effect, and are busy every day teaching the 85 Percent that are victims, slaves and tools of the wicked 10 Percent.

So, if someone offered me what Brother Jay Electronica was offered by Brother Jay Z, I too would accept it with the biggest smile on my face, for I too, as all of us in The Nation of Islam, are The Five Percent:  Poor Righteous Teachers who are called to teach the 85 Percent, and free them from the chains of slavery and subservience as tools of the 10 Percent.

May Allah’s peace be with all of us, and may He grant us forgiveness for any shortcomings that we may have and have manifested.  And if it is The Will of Allah, I hope that I will soon meet Brother Jay Electronica to guide him in The Great Work that I know he will do for The Cause of Islam.

Your brother and servant,