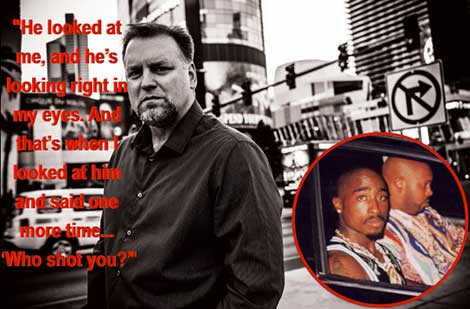 “The night was just starting, and you could just feel in the air that bad stuff was going to happen. Even when it was calm, it was like the calm before the storm.” ~Chris Carroll

One of the first cops to respond to the Sin City scene of Tupac’s fatal shooting is speaking out for the first time, recounting the 1996 moments before he held a dying Tupac in his arms.

“I immediately notice that the guy’s got a ton of gold on—a necklace and other jewelry—and all of the gold is covered in blood. That has always left an image in my mind.”

Chris Carroll — a now-retired Vegas cop — reveals… during Tupac’s final moments before he slipped into unconsciousness [09/06/96]… the rap legend made a slew of failed attempts to try to reply to a frantic, and wounded, Suge Knight; flat out refused to give up the identity of the murderer who fired the fatal shots; and had two choice words for Officer Carroll: “F*ck You”.

“After that, Carroll says Tupac lost consciousness and was taken to the hospital, where he was eventually placed on life support.”

“After I pulled him out, Suge starts yelling at him, ‘Pac! Pac!’ And he just keeps yelling it. And the guy I’m holding is trying to yell back at him. He’s sitting up and he’s struggling to get the words out, but he can’t really do it. And as Suge is yelling ‘Pac!,’ I look down and I realize that this is Tupac Shakur.

There’s something in police work called the ‘dying declaration,’ a legal concept that, in a nutshell, basically says that if someone who believes they’re going to die gives out the name of a suspect or is able to explain what happened, that’s not considered hearsay in court when they’re not there to testify; it’s admissible evidence.

So I’m looking at Tupac, and he’s trying to yell back at Suge, and I’m asking him, ‘Who shot you? What happened? Who did it?’ And he was just kind of ignoring me. He was making eye contact with me here and there, but he’s trying to yell at Suge. And I kept asking over and over, ‘Who did this? Who shot you?’ And he basically kept ignoring me. And then I saw in his face, in his movements, all of a sudden in the snap of a finger, he changed. And he went from struggling to speak, being noncooperative, to an ‘I’m at peace’ type of thing. Just like that.

He went from fighting to ‘I can’t do it.’ And when he made that transition, he looked at me, and he’s looking right in my eyes. And that’s when I looked at him and said one more time, ‘Who shot you?’

He looked at me and he took a breath to get the words out, and he opened his mouth, and I thought I was actually going to get some cooperation. And then the words came out: ‘Fuck you.’