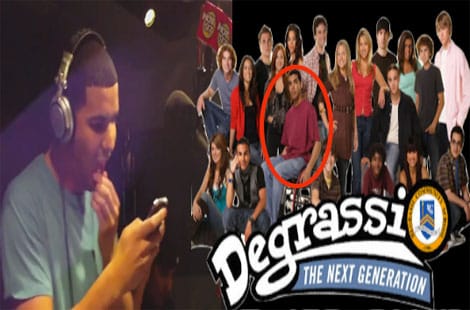 HSK Exclusive – Degrassi Drake may be a recording artist, but he’s far from being a dude who’s left his acting format behind. Our tipster tells us Drizzy’s been doing nothing less than learning his lines — lyrics created by his manager and one of his homeboys. The team is said to have come to freeze. Know why? We’re told they’re “running out of lyrical content.”

“Oliver El-Khatib and ‘OVO Husher’ write most of his lyrical content.”

Drizzy’s now taking it to the next level…ripping off his rap lyrics. That’s why our sources says Drake plagiarized Rappin 4-Tay’s “Playz Club” lyrics, for his “What Do You Love” collaboration with rapper YG.

Here’s what our whistle blower had to say about Drizzy:

“Drake really wants out of his 360 record deal with Cash Money Records but he’s afraid for his life.”