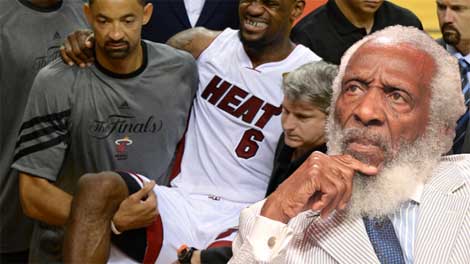 Did LeBron pull a fast one on NBA fans over a fixed game? According to Dick Gregory, that’s exactly what was behind King James’ cramp on the court.

Check out how Gregory broke it all down:

“Then why didn’t he jump up? Why’d he just lay there and somebody had to take him up? That ain’t no cramp, man. That’s a shuck and a jive to justify how they got that game fixed.

The most uninformed person listening to day, who’s had a cramp, knows you just don’t lay there. You jump up and move around and eventually the cramp will leave. As much money as he make, and as good in shape as he is… how come none of them pipsqueak a​thletes didn’t fall?”