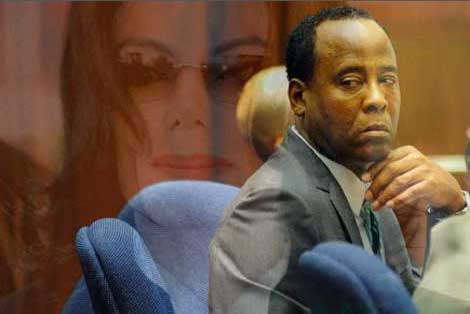 Hey Doc, is all that graphic information really necessary? You were convicted of the crime, you did the time, and you were even released earlier than expected … So, what gives?

Alright ya’ll. Conrad Murray has released a little too much information that many of us don’t care to know, but it’s making headlines so here it is..

About a month after Conrad Murray became a freeman, he’s sticking to his ‘I didn’t do it’ story — blaming Michael Jackson for his own demise.

That seems to be why the disgraced doctor is citing examples to display just how much MJ trusted him, which no one has ever disputed. But that trust is being exposed as a joke. Know why? Because Murray has divulged extremely private details about MJ’s manhood, which we’re sure the late legend wouldn’t want anyone else to know.

“He barely had control of his bodily functions. He wore dark trousers all the time because after he went to the toilet he would drip for hours. You want to know how close Michael and I were? I held his penis every night. I had to put a condom catheter on him because Michael dripped urine. He had a loss of sensation and was incontinent. Michael didn’t know how to put a condom on, so I had to do it for him.”

“Michael Jackson accidentally killed Michael Jackson. I received a phone call at 11.07am, and when I left Michael at 11.20am, he had a normal heartbeat, his vital signs were good. I left the room because I didn’t want to disturb him. I believe he woke up, got hold of his own stash of propofol and injected himself. He did it too quickly and went into cardiac arrest.”