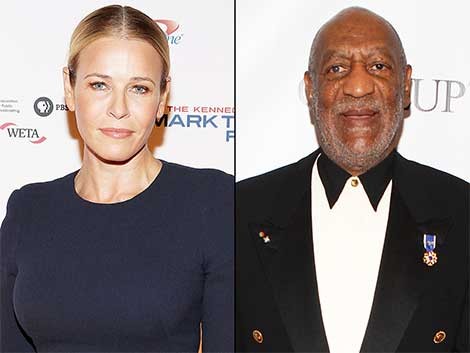 Chelsea Handler may be the latest femme fatal to cry ‘Cosby’ but there’s one major detail separating her story from all the others: She is NOT a victim. Matter fact, Handler isn’t even an alleged victim! According to Handler’s recent Cosby claim, she “could’ve been one of his victims.”

“Chelsea Handler revealed that Bill Cosby might have had plans to “Cosby” her, as she put it.“

In an interview with Esquire Magazine, Handler said that roughly a decade ago, the two were doing stand-up in Atlantic City and were staying at the same hotel. According to Handler, during some down time, Cosby asked a hospitality staffer to let her know that he wanted to meet with her in his suite. She says it was the presence of three guys made all the difference.

“Although Handler didn’t shed any light on what this meeting was actually like, she used Cosby’s name as a verb and told Esquire that because of the interaction, she believes it’s pretty obvious he’s guilty.”

“I said, That’s really weird. I don’t want to go alone. I go, I don’t know him. So the three guys I was with — thank God these guys were with me … I brought them up with me to his room and thank God I did, because now I know what would’ve happened if I went up there alone,” she recalled. One of her friends who was with her at the time texted her recently: “Do you remember that night we went up to, or that afternoon we went up to Bill Cosby‘s and you were so freaked out you made us come with you? … Hello! You could’ve been one of his victims if we weren’t there.”