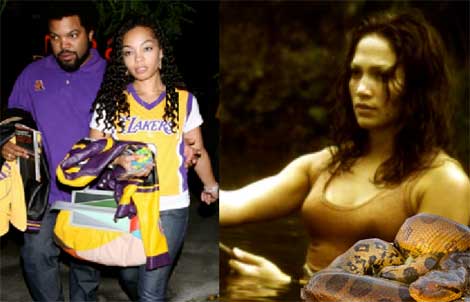 “Kim ain’t no joke. She runs that nicca.”

HSK Exclusive – Ice Cube’s wife wasn’t about to let J-HOE sink her teeth into her man, when the pair shared a South American movie set! Don’t believe me.. Just ask Wesley Snipes, who’s said to have told the former NWA member he’d have no problem smashing that.

You’ll recall, Cube and the former Fly Girl dancer led the cast of ‘Anaconda’, back in 1997. That’s when we’re told Kim Jackson took the first flight to Brazil … after she “got tipped off” the pair were about to jump-off!!!

“Someone from the set, close to Kim, called her up and told her J-Lo was gettin’ too close to Cube between shooting scenes.”