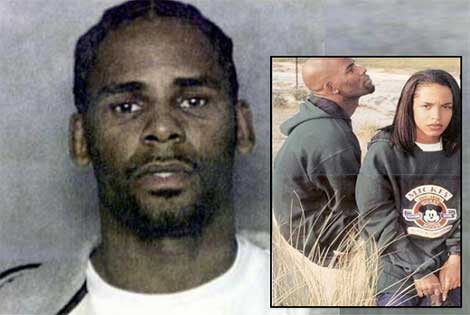 “Big networks want to exploit their stories for a buck. We’re here to make it clear that it’s not okay!” -The Haughton Family

The latest development in Lifetime network’s Aaliyah movie could be the ultimate stab to the late songstress’ loved ones. Know why? R Kelly is now set to cash in on his spot in the project, sources say.

Not only is Robert R Kelly legally-documented to have sexually-preyed upon a long list of alleged under age victims — at 27-years-old, the ‘Keep It On The Down Low’ singer “illegally married” a 15-year-old Aaliyah. It’s a marriage reported to have been annulled by Aaliyah’s parents, citing she may have been coerced to claim she was 18-years-old on the marriage certificate.

“Aaliyah’s personal and professional relationship with R. Kelly will be explored with care in the film as we set out to depict her life with the utmost respect.” -Executive Producer Debra Martin Chase

Here’s what The Haughton Family had to say about the project:

“Aaliyah was more than a singer, she was – and is still – an American music icon whose legacy continues to live on and influence today’s music culture, just as Ray Charles, Notorious B.I.G., Selena and Johnny Cash.

Considering the magnitude of her fans’ affection alone, she deserves to have a tribute much more grand than a television network debut that won’t even consider the perspectives of those who were closest to Aaliyah. Disregarding the families and dishonoring the legacies of celebrated figures who have passed on.”